Back To Overview
eFoil
Electric Hydrofoil lesson powered by CabraTec 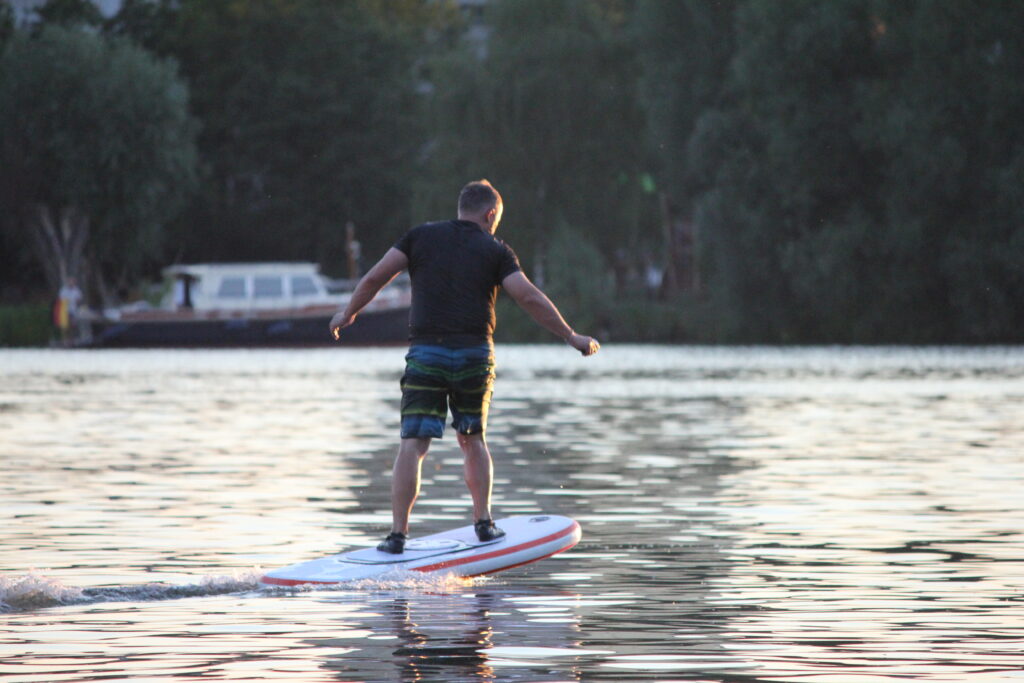 In July we had our 2nd electric hydrofoil lesson based on the EasyGoat from CabraTec.

This was our second try on an e-Foil this year and while we had more air time than before there is still some way to go.

The CabraTec team from Czech Republic was visiting us in Berlin to try their EasyGoat electric hydrofoil.

It was a sunny summer evening on the Rummelsburger Bucht a small lake connected to the Spree river right in Berlin city. Equipped with 2 CabraTec EasyGoat hydrofoils we made it trough the crowds to the water.

When Mira (Founder & CEO of CabraTec) started slowly (the EasyGoat only needs 16 km/h to start flying) the about 60 people watching us where not really impressed and nobody really had an idea what an hydrofoil is.

I guess they were expecting a kind of E-SUP experience.

However, once Mira started flying the crowd was very surprised and you could hear “wow”, “that’s really cool” and “look, look ...” …

After Mira was flying a few rounds it was time for us to start with our 2nd electric hydrofoil lesson.

In May we visited Pacificmeister to try his DIY hydrofoil in Los Angeles. Check out our "How to ride an electric hydrofoil" article.

In LA we we were able to start from the pier, which was much easier. We were standing right away and could start immediately to ride the board.

In Berlin we had to start from the water. First laying on the board, than kneeing and than standing up. This was very hard as the remote was very sensitive.

We spent about 90% of our time just to stand up. Miro mentioned that the next generation of remote control will be more sensitive, which should make it much smoother and easier.

The result of our 20 minute electric hydrofoil lesson was one single flight time for about 1.5 seconds standing on the board and a few other short times kneeing on the board.

We still believe you can learn hydrofoiling within 1-2 hours and this would be much faster than learning for example kitesurfing.

We were not the only ones who tried the CabraTec Hydrofoil recently.

Also our friends from the Allstar Jetboard Tour (Wayne, Tania, Daniel, Nuru and Mike) had a chance for an electric hydrofoil lesson on the EasyGoat 3 weeks ago.

I think their feedback is pretty similar to ours as you can see in the video from Mike:

One thing is for sure: Everybody is exited and wants to try it again. E-Foiling is addictive 😉

A last word on the protection and duct. The 2 CabraTec hydrofoils were prototypes and the propeller was not protected by a duct.

While we felt safe and took the risk to ride the foil without protection we do not recommend this.

We got a lot of negative feedback on the forum about riding without duct and we agree that this should be only an exception.

The reason why we felt safe was that the remote had a very intuitive kill switch which would turn off the motor in the moment you fall.

This was okay for our test rides, but is no solution for the long term. The CabraTec team confirmed they are working on a duct.