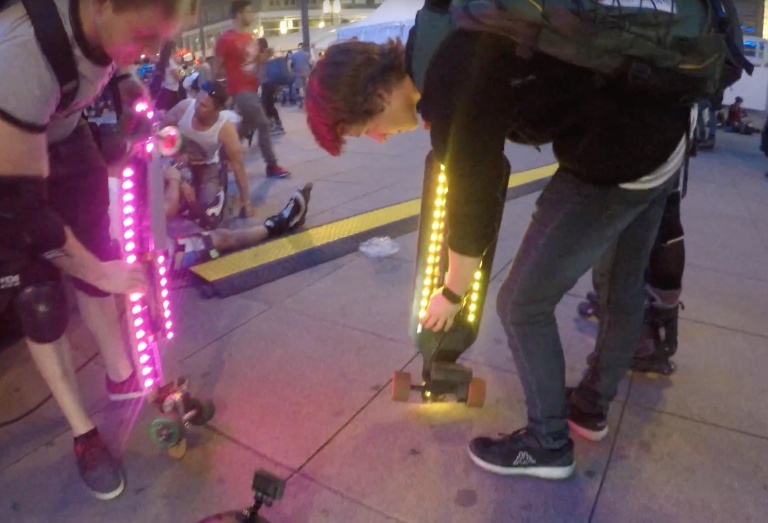 Some E-Boards come with integrated electric skateboard lights such as the Onewheel, which can even change colours from white to red depending on the direction you ride.

But you can also buy electric longboard LED kits to upgrade your current board.

You can find luxury electric skateboard lights such like the Serras Trident Lights which are available for 39 USD each, in red and white. This adds up to 78 EUR, which is not inexpensive for an electric longboard LED kit.

The skateboard lights from Serras are very bright and powered by 3 LED's. They are water resistent and you can charge them via USB. You can chose between 4 different lighting modes.

You have to mount the straps pretty tight, so that you won't lose them.

If you don't want to pay so much for your electric longboard LED kit there are alternatives out. You basically look for bicycle LED's which start selling for less than 10 bugs.

The cheapest version (red and white in the picture above) were just 9 USD, but they have only 2 LED's and you cannot recharge them, which is not good for our environment. They have however also 3 lighting modes and are water resistant.

If you watch out for bicycle lights around 20 USD you will find a pretty good quality and these electric skateboard lights can be recharged via USB. Safe our planet. You can see 2 different electric longboard LED versions in black in the picture above. The left one is about 19 USD the right one about 25 USD.

The more expensive one has brighter light and the battery lasts longer.

For just 10-20 USD you can find LED tapes which you can stick under your board to have an under-glow effect. These lights can even change the color.

Ideally you can connect these LED's to your battery or you have to stick an additional battery under your electric longboard.

8 min lesen
■   Onewheel Pint X or Pint? Or even XR? A comparison