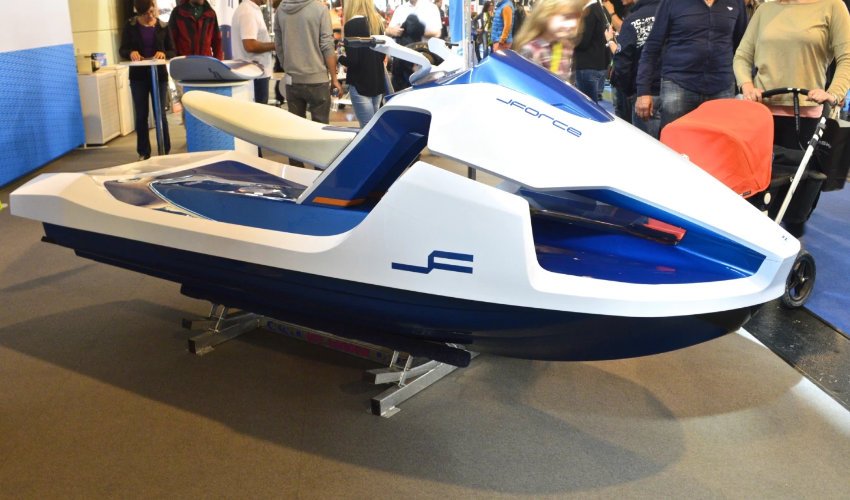 The J-Force eJet was introduced at the Interboot show in Germany in 2015 as one of the first electric jet-ski concepts worldwide.

in 2014 the German company J-Force GmbH from Stuttgart was founded to develop the J-Force eJet as well as eJetboards. The J-Force eJet promised a 320 horsepower electric engine and a runtime of up to 2 hours. Such a strong motor would need a lot of battery power, but the company claimed that this battery would charge in just 2 hours.

The total weight of this electric personal watercraft was 350 kg. A top speed was not mentioned as it was still an early prototype. See the following video:

J-Force's electric jet-board called eBoard was supposed to make a top speed of 55 km/h. The company was arguing it would be the fastest Jetboard at this time. Of course 2015 was early times for electric surfboards. The only companies around at this time were Waterwolf, Onean, Radinn and the first Lampuga. The eBoard had a unique feature which sounded kind of interesting. Instead of using a remote control it had a smart glove. The so called eFlex control had even a display.

Especially the features of the J-Force eJet sounded a bit unreal. A 320 horsepower electric Jetski which charges in just 2 hours seemed to impossible at this time. The company website was originally j-force.de, but it does not exist anymore. The products made it never to market unfortunately.

This is too bad as the German engineers had some very innovative ideas. We guess 2015 was just too early given the early days of high energy lithium ion batteries. Especially for products such like the eJet. You just need a lot of power for an electric PWC and everything has to be perfectly sealed for the use in salt water.