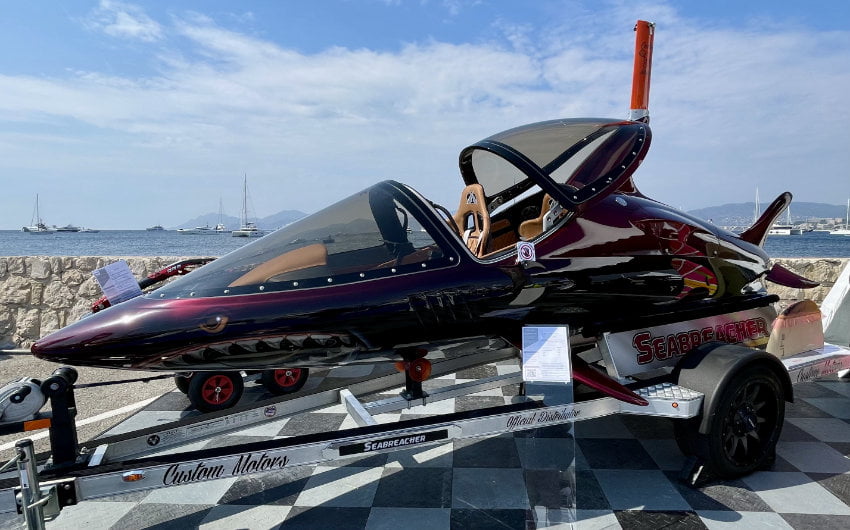 Many Luxury Marine Toys were presented in Cannes at the Yachting Festival from 7 to 12 September 2021. eFoils, jet-boards, diving scooters and some other Luxury Water Toys. We took a close look at them all on site!

The outdoor boat show in Cannes - the Yachting Festival - is divided into two areas: first the old harbor "Vieux Port" where you can see the super-yachts and then Port Canto where you can find sailing boats as well as the Luxury Marine Toys. Between both harbors there is a boat shuttle service with which you can easily get from one area to the other. Or you can take a 30 minute walk along the promenade of Cannes - also really nice 😉 Ideally we have had our eFoil with us ...

At the super-yachts in the Vieux Port I found as luxury water toys mainly diving scooters, which were simply displayed on the back deck without further explanation. In addition to one or two jet skis, we were able to see a few Radinn jet-boards in this area as well. However, this area was not open to the general public and could only be entered with appointment.

We were of course allowed in 😉 and as you can see in the photo below, there was a new jetboard in new colors from Radinn. However, this is just a new hull as there were problems with the current hulls. The paint chipped too easily and there were even customers with cracks in the board. The Swedes want to fix this shortcoming with the new hull.

There weren't many more luxury water toys to be seen in this section of the show - so we spent 90 percent of our time in Port Canto.

Besides the eFoils from Lift Foils, Fliteboard and Waydoo, Lampuga and Awake Boards presented their latest jet boards. We also met Scubajet, but there was no booth. There was hardly anything new to see, but that's not surprising in September, as we are still in the final throes of the current season. New products are usually presented at "boot" in Düsseldorf, Germany in January or in spring.

Nevertheless, we have recorded product demonstrations of the manufacturers for you, which you will soon find on our e-surfer Youtube Channel. So, best subscribe to the channel right now so you don't miss the videos 😉

But we were able to spot something new after all. Lampuga showed the first prototype of their bags and backpacks. So far Lampuga had done without board bags or similar, because the soft SUP body does not necessarily make this necessary. But soon there will be a small backpack for the battery and a big one that can hold all other components like Powerbox, SUP hull, accessories, air pump and so on.

We have already been promised one of the first sets, so we can test them for you.

And then there was Waydoo's outboard motor option, which I found quite interesting. It allows the Waydoo mast, motor and wing to be used as an electric outboard motor for small boats thanks to a mounting option and a steering rod. To do this, the Waydoo eFoil's battery is simply placed inside the boat and connected with a cable. The controls take some getting used to, though, as the eFoil's Bluetooth remote is used for acceleration. Still, not a bad idea.

But there were also brand new Luxury Marine Toys to see and some we could even test on site for you.

First of all there was the Scoot-X from Bagou Boats in France. I don't know if you can call this an electric jet ski like the Narke or the PWC from Taiga Motors, but I can't think of anything else right now. Maybe it's just something completely new.

The Scoot-X is 3.10 meters long and 1.26 meters wide. The two 7.5 kWh batteries power either a 10 or 16 kW motor. Unfortunately, the manufacturer has not yet revealed much about the top speed and range, but we'll stay tuned.

We were able to test the Manta5 electric hydrofoil bike from Australia! We will still publish a complete test report including videos here, but can already reveal that starting the bike is not so easy. Especially in deep water. Even my instructor needed three attempts to start the bike. Although I was able to ride right off the beach on the first try, I was unable to get a start in the water in my 15 minute time slot.

Compared to riding the eFoil, I found the Manta5 water eBike quite unspectacular. I would therefore have expected it to be easier to ride to address a different audience. I think the target audience is experienced water enthusiasts looking for a workout on the water. Stay tuned for the full report.

And then we were able to test the Overboat from Neoocean in France. You might call it an electric hydrofoil jet ski. Or maybe not. In any case, it was fun to just sit and float away over the waves of the Mediterranean.

This hydrofoil electric boat with 4.5 kW power weighs about 100 kg with a length of 3.10 meters and a width of 1.35 meters. There is a two-seater without hydrofoil and a single-seater with hydrofoil. The Hydrofoil is self-balancing and therefore very easy to drive. It even balances the waves by itself. We will also publish a detailed test report about the Overboat here soon.

More pictures from the Cannes Yachting Festival can be found in the e-surfer forum.