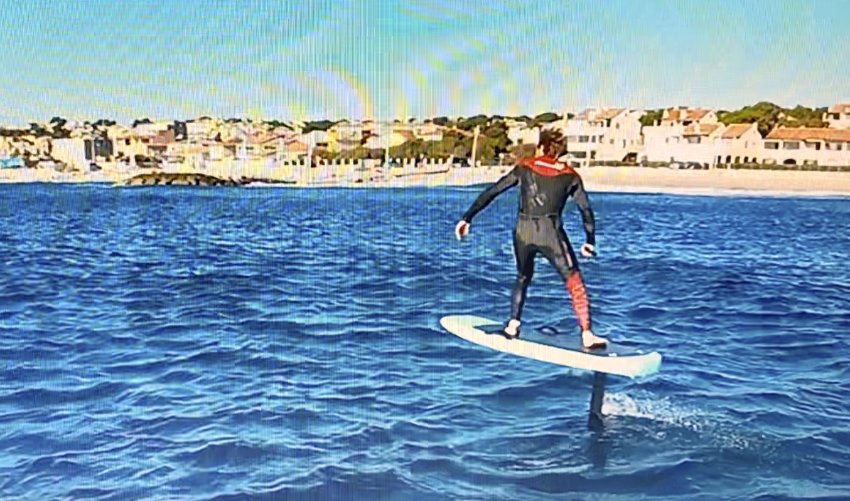 The TIKI Factory E-FOIL was presented as a world premier at the boot show in Dusseldorf. The French manufacturer has its background in SUP surfboards and is also planning to release an E-SUP.

New electric hydrofoil manufacturers appear quarter by quarter and the newest addition is the TIKI Factory E-FOIL from Vern in Southern France. The color looked very similar to the blue that Lift Foils is using, but the board is much larger and is addressed to beginners.

The TIKI Factory E-FOIL we saw at boot looked not bad, but it still seems to be a prototype as there was no battery present and the remote control had 2 buttons where one had no functionality. It has a black and white LCD display according to Sales Manager Leon (CEO of TIKI Factory is Stephane Dufeu), but it did not work when we visited their booth. Their website  is only in French and seems not to list the product yet.

According to Leon the TIKI Factory electric foil surfboard from France can carry riders up to 100 kg with their 3 kW engine. Riding time is claimed with 1 hour 15 minutes and the weight shall be 35 kg including the battery. Not much info on the battery other than that it is running on 48 Volts. In the following video interview Leon claims a maximum speed of 31.5 km/h, but their sign above is claiming 35 km/h. Watch the interview:

The TIKI Factory E-FOIL is supposed to be available at April / May 2020. Given the status we have seen at boot and all the delays we experienced from other manufacturers I am afraid they will be delayed. But let's see.

The TIKI E-FOIL is selling for 7,499 EUR excluding VAT and shipping.

TIKI Factory is also planning to release an E-SUP and they had a prototype without battery at the booth. Unfortunately I missed to take a picture after two long days at the show. We made 8 video interviews over the 2 last days and had plenty of exchange with the manufacturers. If you have still the chance you should go and visit boot. Stay tuned for more news from boot.