Back To Overview
Jetboard
ELECTRIC BODYBOARD - Jet Body Board from Kymera, Alibaba and others 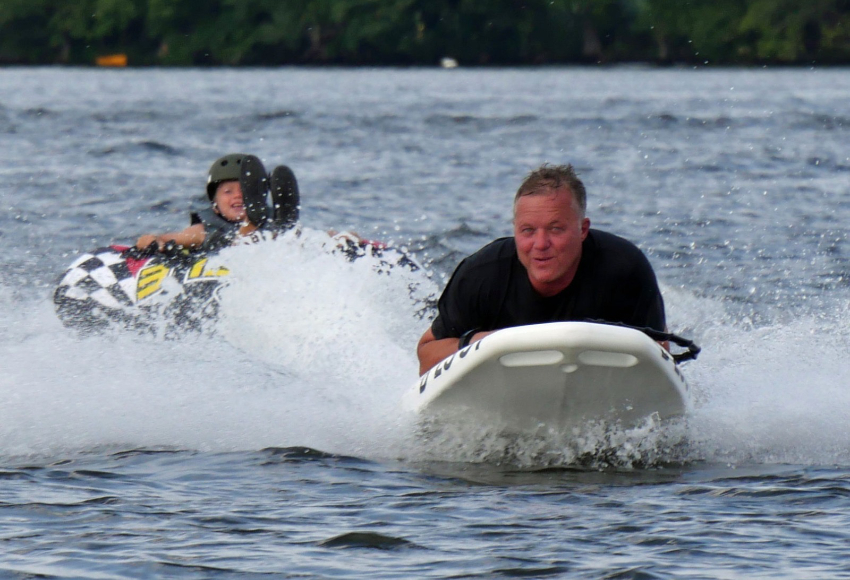 With an electric bodyboard you ride across the surface of the water with a motor. Jet body board manufacturers such as Kymera and Chinese manufacturers sometimes offer very low prices, e.g. on Alibaba. But be careful.

Who is not sometimes tempted to buy cheap electric bodyboard offers on the Internet? In contrast to the jetboards and eFoils, where established manufacturers have prevailed and the boards have been extensively tested, the jet bodyboards are still new and you hardly find any experience reports. If so, then mainly complaining customers of cheap products from Alibaba or Ebay.

Why actually? Perhaps the reason is surprising. Because contrary to what you might think, these bodyboards are smaller than electric surfboards, but that doesn't mean that you need less power. The smaller body jets have less volume and buoyancy. This means that you lie deeper in the water and therefore the water resistance is a lot higher. This in turn means that the electric bodyboards need even more energy to reach similar speeds.

What makes electric surfboards expensive is performance. More power not only means more powerful motors and larger batteries, but the control units also have to be designed for more power and, above all, more heat has to be dissipated. All of this is reflected in the price.

Therefore, you have not yet seen any e bodyboards from the well-known manufacturers. We know from our discussions with some manufacturers (we are not allowed to name names here) that such products are on the roadmap, but the priority is not very high. After all, it is difficult to convey to customers why such an electric jet bodyboard might be more expensive than an electric surfboard or hydrofoil.

Especially on the Chinese platform Alibaba you can find incredibly cheap offers if you google “electric bodyboard”. Sometimes the prices are below 500 USD. I don't want to go into detail on eBodyboards like this, because everyone should be aware that something is wrong with them. Too many people have already been ripped off with such offers.

Even electric jet bodyboards around $ 1,000 to $ 2,000 can't have enough power to get you planning. A good swimmer can probably swim alongside comfortably. It gets boring pretty quickly.

I can only advise against Jet Bodyboard offers below 5,000 USD. There are many examples in our forum where the supposed bargain from Asia led to bitter disappointment. The electric jetboards often give up after a few rides. Then have fun with the support from China. I definitely don't want to make Chinese manufacturers bad, after all, there are great companies like the drone manufacturer DJI. And of course brand manufacturers also have components made in China. The problem lies not only with the “cheap copies”, but especially on platforms like Alibaba. This new sport has its price.

The Kymera bodyboard was one of the first electric bodyboards to be advertised on the internet. Founder Jason Woods made it into the show “Shark Tanks” back in 2016, where he was looking for investors. He was early on and innovative with his motorized bodyboard, but investors let him down. His one-man business had not been trusted and he had even been called a dreamer. Ouch.

Three years later, with the help of a seasoned entrepreneur named Adam Majewski, he made it back to Shark Tank and the team really raised $ 500,000 for 10% of the company. Adam knew how to talk to investors, but unfortunately had little idea about electric jetboards. By the way, USD 500,000 is just a drop in the ocean when developing a jetboard.

We tried to contact Kymera several times, but hadn't had any success since 2017, until Adam Majewski got in touch with us. I had a lot of questions about the Kymera electric jetboard. In particular about the reliability, necessary certifications for import into the EU, as well as battery safety. Even after several back and forth, Adam did not want to go into these questions.

Instead, he wanted to sell me exclusive dealer status for $ 20,000. For that $ 20,000 I was supposed to get a Kymera bodyboard with motor and tools for repairs (why only?) Worth $ 5,000. 15,000 USD would be my "ticket" to become the exclusive dealer for Germany. I have never experienced anything like this with any manufacturer in this industry.

I then tried several times to explain to Adam that I do not sell electric surfboards that I had not tested extensively myself and asked him to send me a test board. I was offered a test ride on the Jet Body Board in California. Of course I told him that this would not be possible this year due to the corona pandemic. However, he did not accept the reasoning (no comment). I offered him to pay for the transport and the board if it was what I wanted. If the Kymera electric bodyboard wouldn’t convince me, I offered to send the board back at my own expense. His answer was: "We do not accept returns". What?

Honestly. I find e-bodyboards quite appealing and I would have loved to work with the company that came up with them so early. But that Mr. Majewski didn't even go into the board, he was just interested in the $ 20,000 to sell a territory (not boards). I then stopped replying because my trust in Kymera was completely broken.

Of course I could just buy a board and try it out. But my fear is that at the low price of $ 3,650, it promises a lot of performance. More on that below.

If the price-performance ratio deviates significantly from well-known manufacturers, I always get worried. My biggest fear is that the batteries are not safe. Adam didn't want to say anything on this subject, which made me even more nervous. I store a lot of batteries from eFoils and jetboards and I definitely want to avoid that an unsafe battery from a cheap manufacturer sets my battery warehouse on fire and destroys all other batteries. Not to mention a fire in the car or on the water. Especially when you lie on your stomach on the battery.

Here are the specs for the Kymera Jetboard with motor:

The electric body surfboard should accelerate you to up to 32 km/h according to Kymera. However, the speed depends on the driving style and above all the weight of the surfer. Riders under 80 kg should bring it to 32 km/h, according to the company. Riders weighing 90 kg are more likely to reach 21 km/h if at all. 90 kg is also the maximum weight for the body surfer.

The Kymera Jet Body Board itself weighs 21 kg plus 11 kg for the battery. That's 32 kg that you have to carry to the water. The range of the battery is specified as 30 minutes, but there should be another 30 minutes at a maximum speed of 5 km/h to bring you back to the beach.

The lithium ion battery can be changed so that you can double your range with two batteries. According to the website, it takes about 2 hours to charge a battery. The Kymera Jet Body Board comes with a battery, a charger (110 & 220 V), a board bag and a Pelikan case to transport the battery. Kymera offers the Jet Body Board in 6 colors. Yellow, green, orange, red, white and pink.

More information at kymera.com. When you visit the website it seems body boards are sold out. Next to other products which did not even launch. May be this is why they focus on selling reseller territories rather than boards.

Which electric bodyboard can we recommend?

As already described above, the well established manufacturers do not see a large investment need here, because the costs are not below a traditional Jetboard with comparable performance. Personally, I often ride lying down. It's really fun because the proximity to the water surface makes the speed and acceleration seem higher.

I use my Lampuga Air quite often for eFoil training sessions. I ride lying down and use it as an electric bodyboard. The three hand straps at the upper end provide a secure hold and enable you to perform agile maneuvers. In addition, the soft SUP cover has a very positive effect here, as you avoid bruises on the stomach and chest. Especially in rough water.

I'm sorry I haven't got better news and can't recommend a cheap motorized bodyboard today. In my opinion, you are better off with the Lampuga Air or other well known Jetboards. But of course we will continue to monitor the market for you.