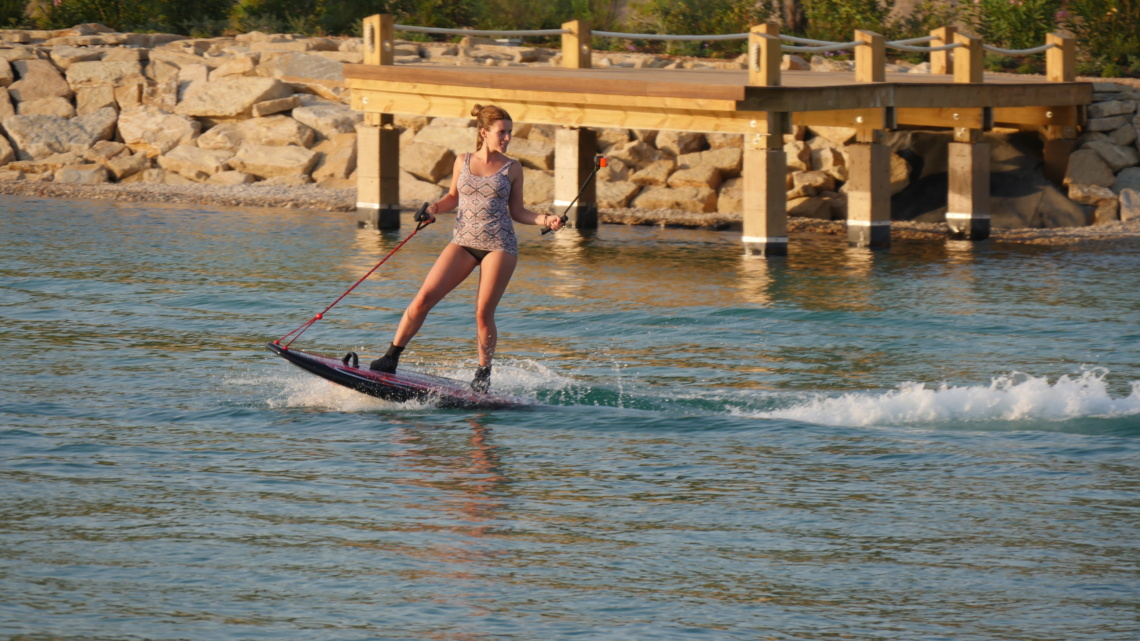 For our Torque jetboard review we met CEO & Founder Dean Jarrett for full 3 days in order to have a closer look at the Mongrel and Xtream electric surfboards.

We also had the opportunity to check out the Torque race setup which enables riders all over the world to compete with each other at the same conditions.

Dean and his wife Ina were joining us at the Allstar Jetboard Festival in August 2018 and brought the 2 jetboards Mongrel & Xtream as well as the racing setup with them.

The Torque jetboards come in a very unique and colorful design. In addition they are much smaller compared to other powerful jetboards such like Radinn and CURF, which enables riders to make much more aggressive turns.

Like the Jetsurf petrol powered surfboards the Torque jetboards are designed for racing and this is why Torque also developed a GPS based race track so that riders all over the world can compete.

The race track is setup in exactly the same way no matter where in the world it will be setup. Start & Finish gate, the buoys and the boards are each equipped with GPS systems to enable accurate setup and time tracking.

The plan is to have multiple tracks setup around the world and the results will be published in the Torque smartphone app in a leaderboard.

Please have a look at the video produced from Mike at jetsurfingnation.com which shows you interviews with Dean and the test riders: 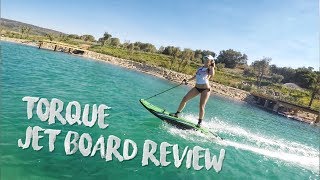 Dean tried 38 different shapes to come up with the right form factor and the current concave shape is up to 15 km/h faster than earlier versions with the same engine.

A good shape is essential for a good surfboard no matter if traditional or electric.

With their iOS and Android apps the board can be setup for beginners or advanced riders.

With 4,799 USD plus VAT and shipping the Torque jetboards are the cheapest jetboard with such a performance.

The Xtream has the same shape as the Mongrel but has with 210 cm length more volume for heavier riders above 85 kg. The price is the same.

The Mongrel is 28 kg (16 kg of that is the battery) and the Xtream is 31 kg. That’s much lighter than most other electric jetboards.

A recommended spare battery is 1,899 USD. The battery life at full racing speed is about 22 minutes, so you may even consider 2 spare batteries. That’s said not many people would ride full speed for 22 minutes, so with average stops and cruising you end up with a similar 30-40 minutes run time.

Both boards come with a lot accessories. Not only the jetboard, remote control, fins, security leash, charger and battery, but also with travel cover, optional foot straps, Torque helmet, vest, lycra shirt and even surf shoes.

The latter ones are really necessary as the Torque boards do not have any rubber pads which make them very slippery. Dean wants to keep the design clean and also thinks that the rubber pads can slow down the board when you do aggressive turns.

What was also impressive are the silent engines. We have so far only seen such a silent jetboard with the Jetsurf Electric prototype.

You can feel that Dean has a surfer background and used to design surfboards, which makes the Torque jetboards ones which can be “surfed”. Tight turns are a lot of fun.

In addition the price tag will be very interesting for many people.

Here is what we liked in our Torque jetboard review:

Here is what we think should be improved and Dean promised to look into this:

UPDATE: Dean confirmed that the new boards now have a kill switch attached to the leg rope and also the battery housing is reworked in order to be waterproof. That’s they way to go.

And here some words from Dean about the slippery board which we share one to one:

“I am still considering about the slippery board. The board is now like a surfboard, and if I wax the board when you lie down it is no longer slippery. As a surfer does for his board. And if customers when learning to ride their own Torque Boards at the beginning they can use some wax, but later the wax is not needed, the rubber sole shoes are not slippery at all.
The EVA deckpads will be used for rental location boards. And also the customers can have an option of receiveing some EVA decking for them to apply to the board themselves. It will not look so good, but they can choose which they prefer.”

We are looking very much forward to see the next improved versions of the boards and at the same time want to make clear that all first generation jetboards have their small issues which will be resolved over time.

Torque is on a good way …

We hope you liked this Torque jetboard review.

For more information visit the Torque website or jetboardlimited.com 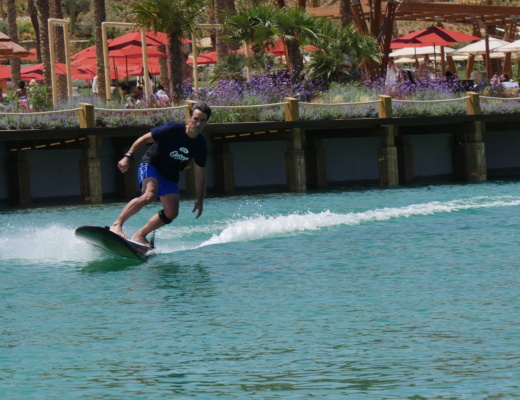 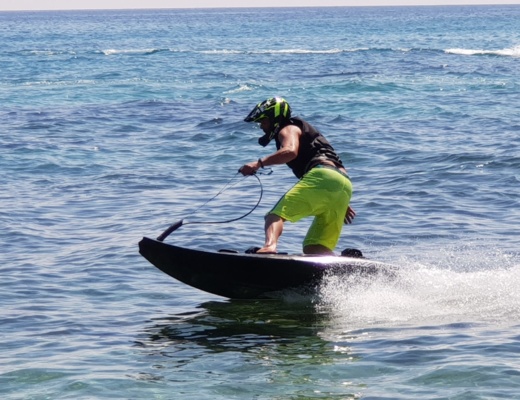 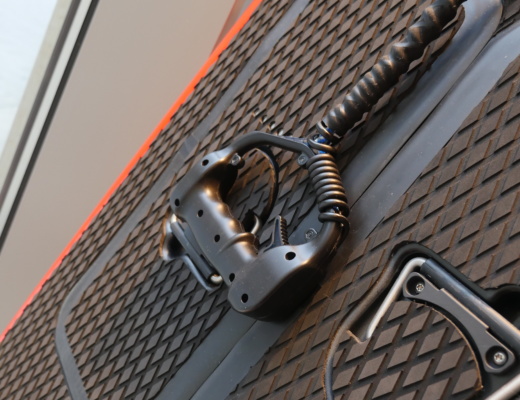 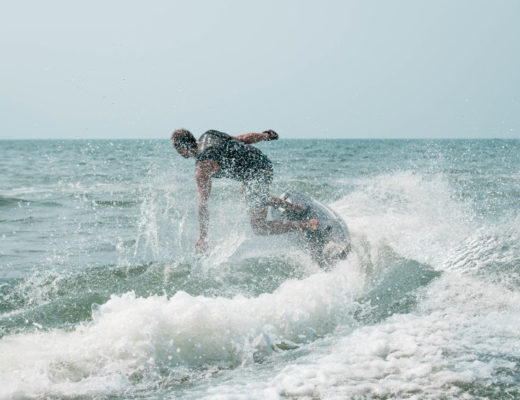 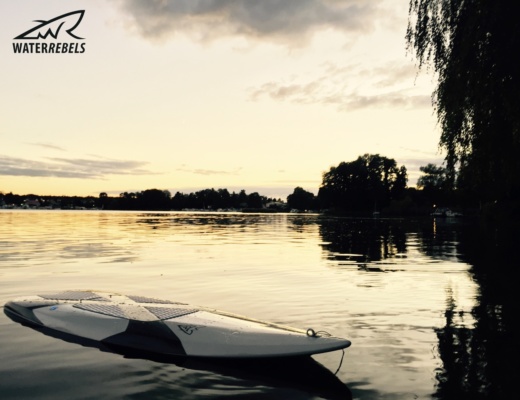 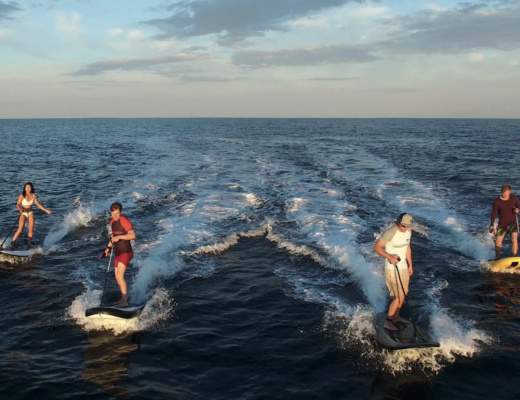