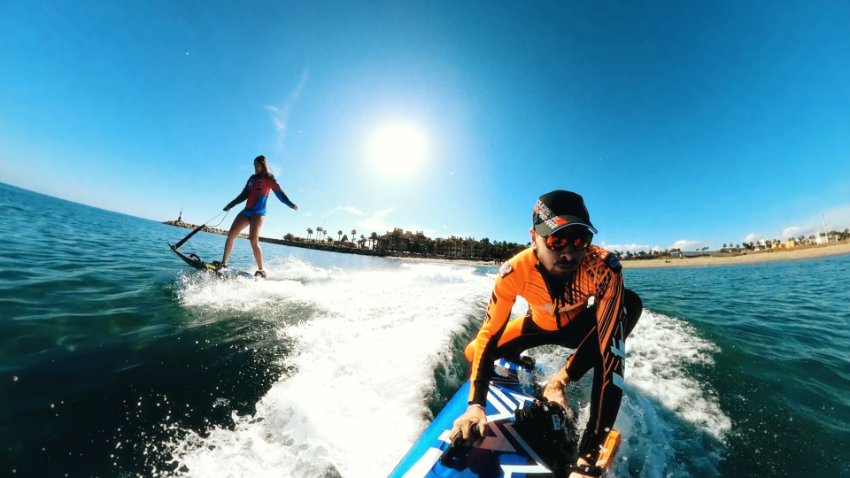 The Ewave V2 Jetboard is a race jet-board similar to Jetsurf and Mako, but it is electric. It was announced in 2019 and now they have a second generation ready for summer 2020.

Race jet-boards are designed for adrenalin junkies as they are good for sharp turns and high speeds. They are more difficult to ride as for an example a Lampuga electric surfboard. They have less volume and will not float without a certain speed. They are using foot straps and a handle to maneuver the board. The controller is usually wired through the handle.

Mako is only producing petrol powered jetboards. A segment with is dominated by Jetsurf from Czech Republic. Jetsurf has announced the Jetsurf Electric for summer 2020. An important move given that more and more countries are banning petrol powered surfboards.

Coming back to the Ewave V2 Jetboard. Don't mix this board with the EWAKE Jetboard which is made in Germany. The Ewave Jetboard is made in China but the team works with local distributors in the US and Europe who take care about the support and warranty. We had a look at the first generation of the Ewave electric surfboard in August 2019, but only a very few units made it to Europe or shipped worldwide last year. This shall change in 2020 and the Ewave team did use the last months to improve certain components and to launch new accessories.

The Allstar Jetboard Tour team around Mike and Wayne did a new video to show the improvements and new accessories. Watch the video here:

So what's new? The throttle was improved to be more responsive and they battery was re-worked. The battery is now a little bit heavier, but I assume the guys know what they do.

2 new Ewave Jetboard accessories were announced as well. Ewave does now also offer a tube as we have seen from Jetsurf before. The tube makes the Jetboard floating without having any speed. It is designed for beginners and kids. You will loose the ability for sharp turns and high speeds once the tube is on, but again it is for beginners and kids. The second accessory which was announced is the hydrofoil option. You can take out the jet and replace it with mast, wing and propeller to make it an electric hydrofoil. We have heard this concept from other manufacturers before, but Ewave might be the first company to release it to market.

The board is available in 2 models. The Ewave V2-5000 and the Ewave V2-6000. As you can see in the table below the boards are almost identical. The only difference seems to be the torque with 5,000 and 6,000 rpm and the color. The V5000 is green and the V6000 is blue. We heard that the V6000 is potentially replacing the V5000 in future. This makes probably sense as they are so close together and the V5000 might be underpowered for heavier riders.

As mentioned before the Ewave Jetboard is designed and manufactured in China, but sold through local distributors in the US and Europe.