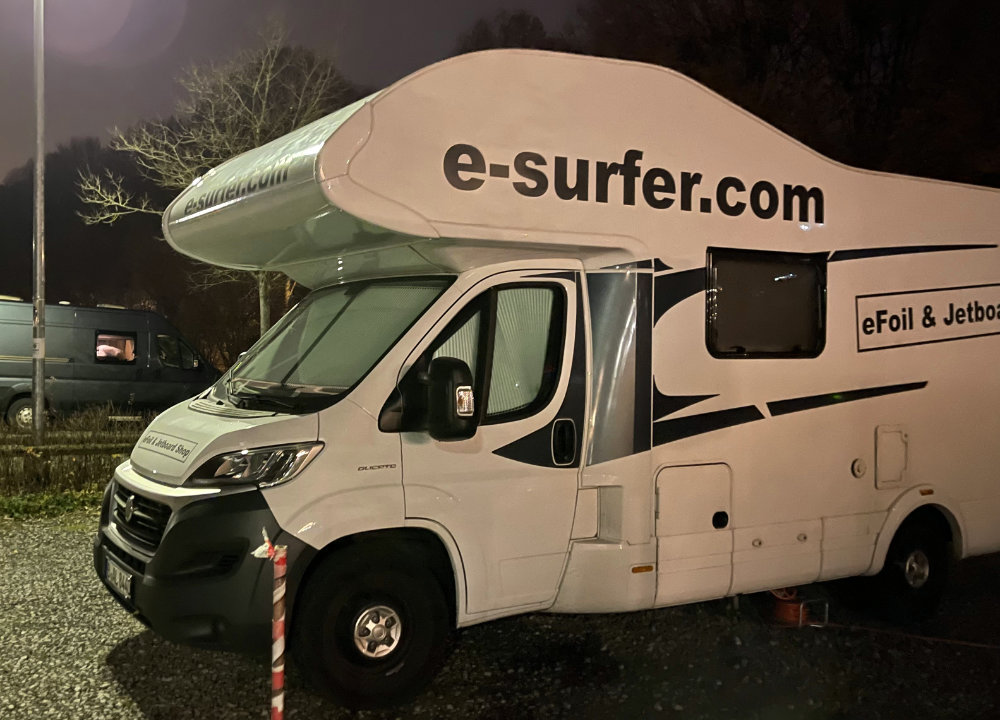 We are often asked how to charge e-surfboard batteries. This is not a problem at home, as the chargers of the batteries are simply operated from a 110 or 220 volt connection. But can you charge on the go?

Even worldwide there are no problems charging the batteries at the house connection, since brand manufacturers include chargers that can withstand input voltages of 100 to 230 volts. But what do you do when you are traveling with a motorhome or boat and have no house connection available? To get to the bottom of the matter, we first looked at the performance data of the eFoil and Jetboard power supplies.

While manufacturers such as Lift Foils and Radinn work with quick-chargers that offer a charging time of around two hours, there are also manufacturers who offer a so-called standard charger with charging times of up to 6 hours. Of course, the standard chargers need less power and sometimes get by with 700 watts. Fast chargers, on the other hand, need between 1200 and 3000 watts. The number of watts is calculated as follows:

Here are a few examples of the performance data of the power supplies:

If you want to charge several e-surfboard batteries at the same time, you simply add the watts. To be on the safe side, you should always have a bit of room upwards so that nothing overheats or the fuses stop the charging.

Charging the e-surfboard batteries in the car:

The following question is not that rare. Can I charge my battery from the car battery? In short: no. Most cars have a 12 volt battery with a capacity between 28 and 120 ampere hours (Ah). 36 Ah batteries are normally installed in small cars, while the larger batteries are installed, for example, in larger diesel vehicles with automatic start-stop. Let's take a large 100 Ah battery as an example. 100 ampere hours means that the battery can deliver a charging current of 33 amps for 3 hours. Current is equal to capacity divided by time. In this case 100 Ah divided by 3 hours equals 33 amps.

Now you can easily calculate the power in watts. 12 volts times 33 amps is 396 watts. As you can see, you are far from the required power for the power supply. Even a second battery or a 24 volt battery or even two 24 volt batteries are not enough. Especially since it is questionable whether the batteries can cope with such a high charging current in the long term. And in the end you want to start your vehicle too, don't you?

Charging on the boat:

The situation on a boat is similar. The batteries used here are very similar to the batteries in cars or trucks. Things are different if your yacht has its own power generator that runs on petrol or diesel. Such units usually provide between 2 and 50 kW. So here it would be possible to charge the battery. Small boat diesel units start at around 5,000 euros.

So-called mobile power generators are cheaper. These can not only be operated on the boat, next to the mobile home or car, but virtually anywhere. There are gas, petrol and diesel units with outputs between a few hundred and up to 10 kW. The more powerful models are not only more expensive, but above all heavier. With a 5000 watt model for charging two e-surfboard batteries at the same time, 100 kg can come together and that is no longer very mobile. In contrast, smaller models with 2,000 watts weigh around 25 kg. You should also pay attention to the noise volume of the devices. The generators are priced between EUR 500 and EUR 2,000.

We ourselves are planning to buy a mobile power generator in spring. After initial research, we are currently flirting with the Honda EU 22i. According to various blogs, it should be quiet and reliable. With a maximum output of 2,200 watts and a continuous output of 1,800 watts, this should be enough for our needs. We would have liked to have taken the big brother EU 30i to have a little more room for improvement or possibly even to charge 2 batteries in parallel. But at 61 kg it is too heavy for us. The 22i weighs only 21 kg and is much more compact at 512 x 290 x 425 mm. However, you have to do without the electric starter here. The price of the Honda EU 22i is around 1,500 euros.

As soon as we were able to test the generator on our motorhome tours in the spring, we will add our experiences here.

Of course, there are also mobile power stations based on lithium ions. Like a a large power bank for cell phones. But on the one hand, the power here is not sufficient (a few hundred to 2,000 watts) and they are quite expensive. Charging a battery with a battery therefore seems to make little sense. You should better invest the money in additional eSurfboard batteries. This saves you a charging cycle and you can use the batteries straight away. On a boat, power stations charged by solar modules can make sense to support a built-in generator. Stand-alone models based on lithium ions make less sense in our opinion.

We look forward to your feedback, testimonials and further questions in our forum. Especially if you know other solutions or can recommend alternatives to the Honda power generator, we would be very happy to receive your feedback. We haven't bought the Honda yet and are happy to let us change our minds if there should be something better. We are not married to Honda 😉