Back to overview
Jetboard
eFoil
Jetboard or eFoil? Which one is for you? 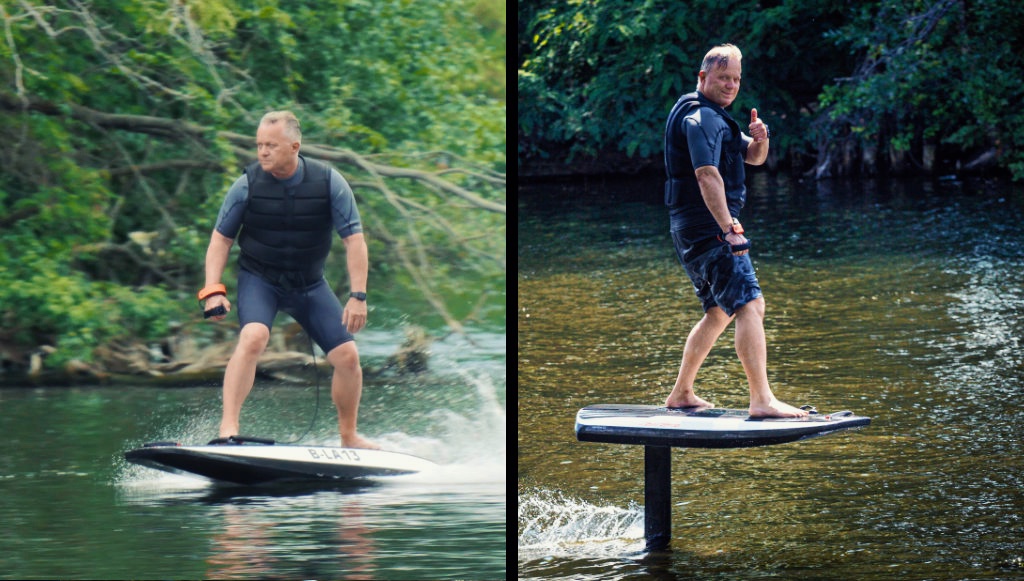 Whether to buy a Jetboard or eFoil depends on personal preferences as well as the area you want to ride your eSurfboard. Fast and zippy or elegant curves is ultimately a matter of taste.

The question is somewhat similar to the discussion of whether to ski or snowboard, as a significant part of the decision depends on personal taste. Some want to feel the water spray and experience high speeds, while others want to glide elegantly over the water. But there are also technical and legal reasons that can influence the decision.

The fun factor is similar for both eSurfboard types, but just different. Electric hydrofoil riding is often compared to snowboarding in powdery snow. The smooth movements are actually quite close to deep snow snowboarding. I would even say it is closer to surfing than jetboarding. I say this because the foil board is similarly easy (or even more sensitive) to steer by shifting weight. A jet board, on the other hand, doesn't have the same turning ability due to the drive at the end of the board. That's why you see the sportier boards also equipped with foot-straps and handles to make turning easier.

When it comes to speed, the jetboard comes out on top. If you like high speeds of up to 60 km/h and want to corner steeply, you should consider a jet board. While the eFoils aren't slow at up to 45 km/h, the cruising speed is actually 25-30 km/h. You wouldn't necessarily shoot the slope with a snowboard either, but you would probably with a ski. In addition, a fall at 45 km/h on an eFoilboard would be a lot more dangerous and painful than at 60 km/h on the water surface because of the height to the water surface.

If anyone wants to race, it would be with an eJetboard. This is not to say that an eFoil is boring. Here, too, riders are pushing themselves further and further. For example, the first attempts at backflips and 360-degree turns can already be seen on videos.

The biggest technical difference, apart from the fact that one board rides on the water surface while the other floats above it, is the range. With a jetboard, the range is around 30 minutes. Mostly less. The eFoils manage up to 90 minutes and with special wings even 2 hours. There are two reasons for this. Firstly, a jet drive is less efficient than a propeller drive, as it is used with the electric hydrofoils. Secondly, the water resistance and displacement energy is many times higher with a jetboard. As soon as an E-Foil takes off, the energy consumption decreases by up to 70%.

As a result, E-Hydrofoil batteries not only last longer, but they are also smaller and lighter. And they usually charge faster. In general, an eFoil including battery is about 30 kg while a jetboard can weigh 50 kg or more. Simply more power is needed for a Jetboard. While an eFoil can handle riders over 100 kg with 5 kW, a jetboard would need at least 10 kW.

In Germany for example, all motorized surfboards over 2.2 kW must be registered and have a license plate. While eFoils pass as small vehicles, jet boards must be registered as a personal watercraft (jet ski). Jet skis, and thus jet-boards, may be ridden on inland waters only on designated jet ski routes. Outside such routes, the jet boards may thus only be used for a so-called hiking trip. A hiking trip is a straight drive from A to B without making unnecessary turns. This is quite counterproductive when jetboarding 😉

The reason for this is the increased noise emissions due to the jet drive as well as the wave impact, which does not occur with the eFoils.

So the legal aspects can have an influence on the choice whether to buy a Jetboard or eFoil. On some lakes you would rather get problems with the authorities with jetboards. The situation is different at the sea. Here there are hardly any restrictions for eJetboards.

But there are also area-specific hurdles for the electric hydrofoils. Shallow water or sandbars, for example. To ride an eFoil, the water should be at least 1.20 meters deep, otherwise it can happen that you touch down. Shallow areas, where you sometimes have to walk 100 meters or more to get it deep enough, can also be a pain for e-foil riders.

Speed limits on lakes, which are usually around 25 km/h (at least here in Germany), would again be an argument for the electric foil board. Here you are in the range with the above-mentioned cruising speed. With the 40 to 60 km/h fast jetboards rather not. Many small and sporty jetboards can not be ridden at all below 25 km/h, because otherwise the planning is not achieved and thus the buoyancy is not enough.

You would think that e-foiling is more difficult to learn than riding a jet board. In principle, this is true, because an e-foilboard is very sensitive to weight shift as soon as it takes off. So you have to have a good sense of balance. However, the comparison also depends on the particular model. A big jet board like the Lampuga Air with 210 liters volume is very easy to ride. Definitely easier than any e-foil. On the other hand, a small jet board, like the Radinn with only 61 liters of volume is harder to ride than a bigger electric foil board with a large wing. Especially for heavier riders.

On top of that, when you ride an electric hydrofoil on the surface (i.e. not taking off), the underwater wing gives you further stability. But ultimately, the eFoil is meant to float. All in all, the eFoil is a little more difficult, but can be mastered within an hour by anyone with water sports experience. With the Lampuga, you just stand on it and go.

Price-wise, there are hardly any arguments why you should go for a Jetboard or eFoil. Both are pretty close to each other with the same quality and performance. The area is an important factor but in the end it is a matter of taste. I am in the lucky position to have several jetboards and eFoils which I can use. This is of course the ideal case 😉 But if I had to decide for one board, then it would be the eFoil. This is due to my local area with speed restrictions and the fact that the battery simply lasts three times longer.

I look forward to your opinion and feedback in our forum. There you can of course also ask further questions.