Back To Overview
eFoil
The 15 best eFoil tricks 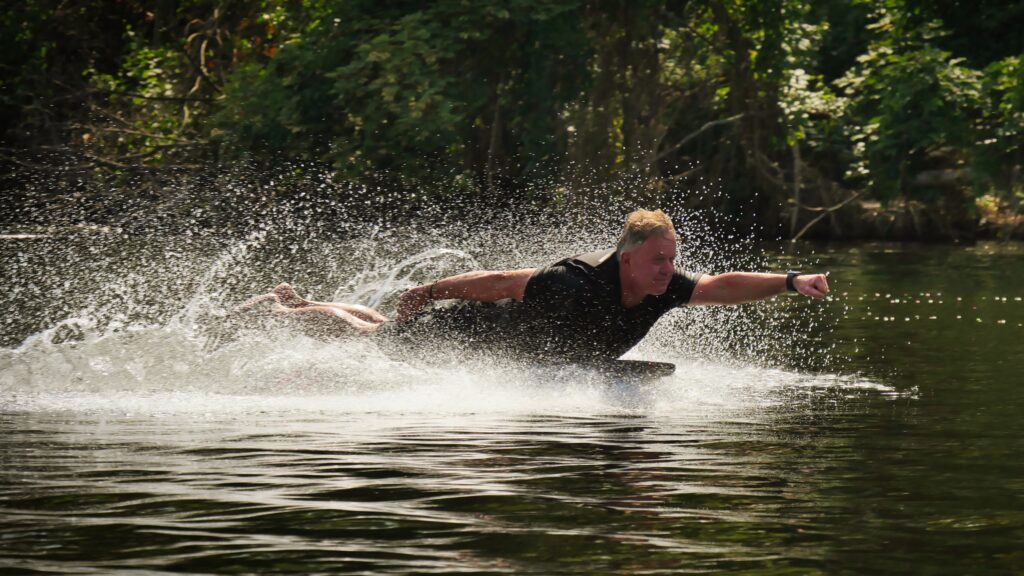 Our list of the 15 best eFoil tricks. Always drive straight ahead? No way. There are already plenty of eFoil tricks and more are coming.

In addition to casual cruising and steep carving, more and more eFoil tricks are being featured on social media. Our friend Mike from Jetsurfingnation summarized some of these tricks in a video. Check it out:

Here is our list of the best eFoils tricks. You can see many of them in Mike's video, but not all. We will also be adding new eFoil tricks to this article over time. Before you start with tricks, you can learn how to eFoil in our online course.

One of the first eFoil tricks was to fly sitting down. You push your feet underneath you while kneeling on the surface. Then you shift your upper body backwards to take off. Depending on how far you bend your body forward or backward, you regulate the height. You can either stretch your legs or bend them. Quasi two variations of this eFoil trick.

The flying carpet was first seen on the Onewheel in Youtube videos. But already shortly after, the first videos with eFoils were added. For this, eFoilers like Mike put a carpet on the eFoil and then foiled cross-legged on it. The effect is impressive and the eFoiler looks like Aladdin on a flying carpet.

3. Barefoot water skiing on the eFoil

This eFoil trick is also a variation of the first eFoil trick. While sitting, you spread your legs and let your lower legs hang down. While doing this, the soles of your feet are placed on the surface of the water. This trick is really a lot of fun and provides a nice foot massage at the same time.

As everyone knows, riding eFoil while lying down is quite a lot of fun. Gliding so close over the surface at high speeds is a great feeling. Now, if you put on the arm that holds the remote and stretch the other forward, you'll look like Superman. Especially when you float so flat above the surface that the board and mast are hidden by the splashing water.

The Lazyboy is also a lying trick. But on the back. To do this, first ride sitting down, then slide forward as far as you can, and then put your upper body down. This trick is not so easy. Already, if one lies on the belly it is not so easy to shift the weight. On the back it is even harder. Try to find the best position by sliding on the board and then regulate the height with speed. As you can see in the picture, then actually only a cool drink is missing …

Backward eFoiling is the next level. But be careful: make sure the water in front of you is clear and you can't hurt anyone including yourself. You will be able to see next to nothing while going backwards. This also makes the difficulty of this eFoil trick, which can be performed while sitting, kneeling or lying down. And of course standing 😉 Standing is probably the highest difficulty level.

More and more often you see eFoil videos with a dog on the board. Recently even with 2 dogs plus the rider. The bigger the board and the lighter the passengers, the easier this is to manage. This is especially true if you want to take a second person on the board with you, as an adult human is usually heavier than a dog. With children please be careful. Here a helmet and a vest should be worn by the short ones in any case.

The eFoils usually carry a maximum of 120 kg. So if the rider has 80 kg then actually only 40 kg remain for the passenger. To start, you need to pick up speed pretty quickly so that both riders are carried on their knees and the board starts planning. The front passenger should slide forward as far as possible in the knees, so that the rider can stand up. Then the co-rider stands up and afterwards the board is lifted off.

As in skateboarding and snowboarding, riding backwards (in this case, in the non-preferred foot position) is called "fakie" riding.

In Switch Stance, you switch from normal to fakie riding while flying (!!). An extremely difficult trick that requires practice. In the video of Mike you can see this from minute 6:27. Here is a photo at our place in Berlin:

For this eFoil trick you need a second foilboard without motor. These boards are usually designed to ride waves. Since recently there is the eTow from Takuma. But if you want to save the 15.000 EUR, you can easily convert an eFoil for this purpose.

You remove (if possible) the front wing of the eFoil. This prevents the eFoil from lifting off. Then attach a short wakeboard rope to the top of the mast under the board. Now go into the water with both boards and let the line tighten. Use the remote to control the speed of the eFoil, which will pull you on the foilboard.

You should already have experience with the foilboard, because the start with handle and remote control is not easy, but as soon as you are out of the water, it is to handle. If you steer the foilboard to the left, the eFoil will go to the right (and vice versa). This is how you steer.

The easiest way to ride the eFoil without engine power is to foil behind the boat. To do this, find a boat with the biggest possible wave and approach it from behind. Then look for the spot with the highest wave crest and ride into the wave. As soon as you feel the thrust of the wave, take your foot off the gas and shift your weight to the back.

The most difficult part of wakesurfing is shifting your weight backwards in time. While the motor always pushes the tip of the eFoil up, this pressure is eliminated when you get off the throttle. This must be compensated for. When you then go back on the throttle, the weight moves forward again.

An eFoil with a standard propeller would slow down too much. Therefore Lift Foils offers a foldable propeller and Fliteboard the TrueGlide propeller to ride waves. The Audi eFoil does not need separate accessories for this, as the small diameter of the jet creates hardly any drag.

The next level of eFoil tricks would be riding larger waves in the sea or ocean. Basically, it works the same as behind the boat, except that bigger waves provide more thrust. Fliteboard even allows you to measure these wave rides, which are then sent to the smartphone app. So Fliteboarders worldwide can compete to see who has foiled the longest wave without engine power.

The photo below shows the Audi eFoil surfing in the North Sea near St. Peter Ording even in small waves without engine power. You can see that the remote control hangs down from the wrist.

Especially in the social media you can find more and more crazy ideas how to have fun on the eFoil. With the "Air Chair" you put a chair on the board and sit down comfortably to eFoil. With a large enough eFoil, this is not that difficult. The word "Air Chair" originally comes from water skiing. There was already decades ago a hydrofoil on which one sat and was pulled by the boat.

Whether it's a chair, a lounger or a BMX bike, there are no limits to the imagination when it comes to eFoil tricks. Recently you could see an eFoiler in a video, which actually had a working grill on the board and grilled bratwursts 😉

As with any board sport, jumps (ollies) are part of the trick assortment in eFoil. We already took the photo below in summer 2019 in Tarifa. This jump was shown on a huge Fliteboard Air V1 with a big wing as part of the Kitesurf World Cup. At that time we asked the Pro riders to try out the then quite new eFoils. These guys did the first eFoil tricks after only a few minutes.

Today there are much shorter boards and the Fliteboard Ultra comes from the factory with holes for footstraps. This allows for much higher jumps. And that's the technique:

For the first jumps, a larger board is recommended, because this makes the landing easier. However, the wing should not be too large, as this in turn makes the landing more difficult. A large wing increases the resistance when diving in before the board can stabilize you on the water surface. Yo-Yo Effect.

With smaller boards (less weight) higher jumps are possible, but the board dives further when landing and makes it more difficult to "pick up speed again" after the jump. The highest jumps are achieved with small boards that have foot straps and small wings that create less resistance when diving in, but increase the speed.

To set up for the jump is to build up sufficient speed. Not top speed but fast enough. Just before the jump, push the nose down until just before touchdown and then put the weight on the back foot to catapult the board out over the wing at full throttle. In the air, step off the throttle and touch down again with weight on both feet. As you touch down, lift the nose slightly. This may cause the board to decelerate plenty. To build speed, weight forward and full throttle. Here's a picture at our place in Berlin on the Awake Vinga:

To learn this eFoil trick, you must be prepared for many crashes. Therefore, a helmet and vest are mandatory during training. A long wetsuit is also recommended.

This sport is just starting and we will see many more new eFoil tricks in the future. Especially the innovation of Fliteboard to install footstraps allows more and more radical maneuvers. In the video of Mike you can see the first attempts of backflips. There is even a successful 360 by Simon (Fliteboard Team Rider), which should be possible only with footstraps. It remains exciting.

Do you have any other eFoil tricks we should present here? Then write us with pleasure.