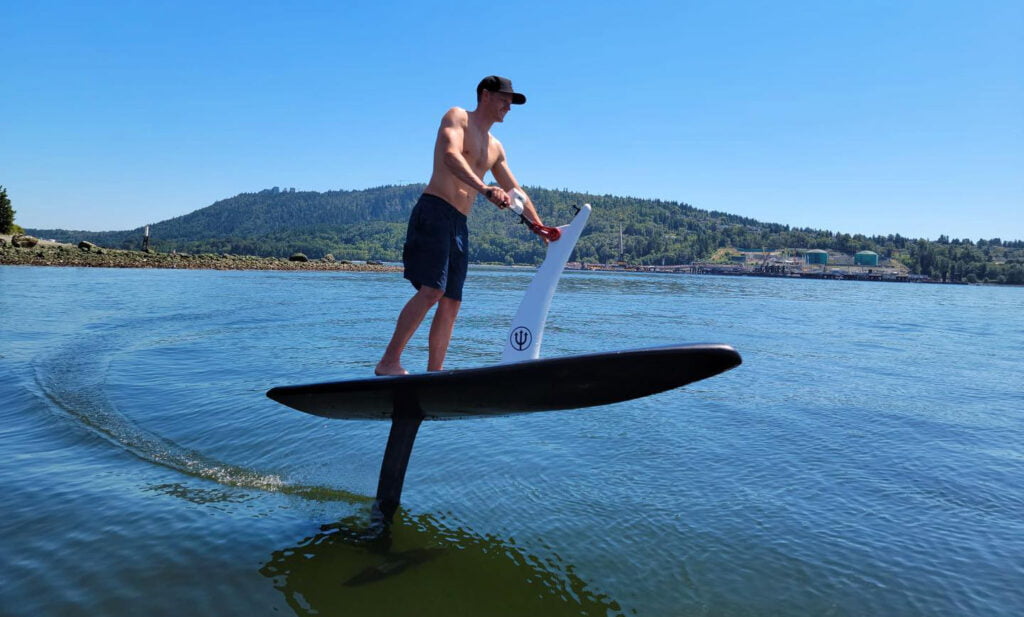 We have tested the Hydroflyer for you. The eFoil scooter with handlebar is a mixture of e-Foil and electric jet ski.

At the beginning of October we met the Hydroflyer team from Canada in Cascais, Portugal, together with Mike Z from Jetsurfingnation. The following video was made and of course we tested two Hydroflyer boards ourselves. Simply described, the Hydroflyer is an eFoil with handlebar where the tips of the feet both point in the direction of travel.

The handlebar and the large volume make launching very easy. Steering, however, takes some getting used to for eFoilers. So let's start with the video:

Co-developer Jerry normally rides mountain bikes and snowmobiles. Hence the approach with the handlebar. He loves to jump and the handlebars should help with that. With handlebars there are four contacts to the board (two feet and two hands) while with the eFoil there are only two.

eFoil, water scooter or electric jet ski? Maybe a little bit of everything. You can ride the Hydroflyer on the water surface without taking off. In this case, the riding experience could be compared to that of an electric jet ski (stand-up) or perhaps an electric scooter on the water. Riding on the surface - including launching - is very easy because the handlebars give you stability. In 2023, there should be a fin option for the Hydroflyer: that is, a short fin with a motor that does not let the board take off.

But of course it's all about flying, because after all, an 82 cm long mast with an underwater wing is installed under the board. Lifting off and controlling the height works - just like with an eFoil - by shifting weight. If you shift your weight backwards, the Hydroflyer rises. If you move your weight forward, the board sinks.

Acceleration is via a throttle lever on the handlebar. Similar to an electric jet ski. The control unit with the throttle communicates via Bluetooth with the controller in the board. This should later make it possible to remove the handlebars and use the Hydroflyer as a pure eFoil with a separate remote control.

The foot position is different from the eFoil. The manufacturer recommends that both foot tips point forward. This is supposed to be more ergonomic and thus prevent more fatique from being placed on one leg, which can lead to pain during prolonged riding. This can indeed occur when eFoiling, but is usually compensated by changing the foot position.

So with the Hydroflyer, you don't shift the weight between the front and back leg to control the height, but with how far you push your upper body forward or back over the handlebars. I have to say this technique was fun and I found it easier compared to an eFoil. So good for beginners.

However, I had a harder time with the steering. Somehow a handlebar always tempts you to steer with this "handlebar". After all, this is how you learn to steer a bicycle or scooter from childhood on. But also the Hydroflyer is steered by weight shifting (left/right). I had the same problem during the test rides with the Manta 5 eFoil waterbike.

So the "handlebar" is not there to steer, but to give stability to the rider. A great advantage for beginners, but also to make jumps. Jumps are a lot easier than with the eFoil. This is not only due to the handlebars, but also the high volume (160 liters - cruiser model) as well as the underwater hull. The board looks more like a boat than a surfboard from below.

The lithium ion battery is said to allow a range of up to 2 hours and 40 km and is therefore in the range of Audi, Fliteboard and Lift Foils. The charging time of 1.5 hours is also similar. At 35 to 40 kg, it is a bit heavier than the eFoils, which weigh 30 kg or less. This is due to the additional handlebar and the larger board.

The boards come in three sizes:

The maximum rider weight is specified at 120 kg. On the remote control, you can choose between three power modes to limit the power. There is even a reverse gear to make "parking" easier.

Some data from the Hydroflyer website differs from what we were told in Portugal. I think small changes are still being made before they plan to go into mass production in 2023.

On the subject of safety, a couple of features stand out. The handlebar can avoid contact with the wing and motor if you keep holding onto the handlebars during a fall. This pulls the top of the board towards you.

Since the handlebar is lighter than the mast with motor, the Hydroflyer will right itself after a fall. Whether you can injure yourself in a fall on the handlebars, the manufacturer considered unlikely. But there is a protector - similar to a BMX bike of the first generations.

On the other hand, there is a safety wing (Vortex 210) for beginners. In this wing, the edges are provided with a rubber protection, which should prevent injuries. The other three wings, Vyper 190, Hyper 170 and Vyper 150 for advanced riders, do not have this protection.

Last but not least, the Hydroflyer is secured by a magnetic kill switch. Similar to a jet ski, this is attached to the wrist and detaches from the remote control on the handlebars when you fall. This stops the motor.

What does a Hydroflyer cost?

The Hydroflyer is priced at $15,500 USD plus taxes, shipping and import fees. So including 19% VAT in Germany it will come to about 18,000 EUR. A proud price and a bit more expensive than the premium eFoils.

The short Surf Pro version will also be available with footstraps for even more control. The boards should be available in different colors from 2023. When it is so far, you will of course find out here.

Due to the fast learning success of the big cruiser model, the manufacturer sees the rental market as a good target group for the Hydroflyer.

The Hydroflyer is not an eFoil, and according to the manufacturer, it is not supposed to be. The riding behavior is very different. Easier to learn, but in my opinion limited in curves. At least this is my feeling. Perhaps a little to compare with a skateboard (eFoil) versus a stunt scooter (Hydroflyer). So at the end of the day, it's a matter of taste. Personally, I found it was quite fun.