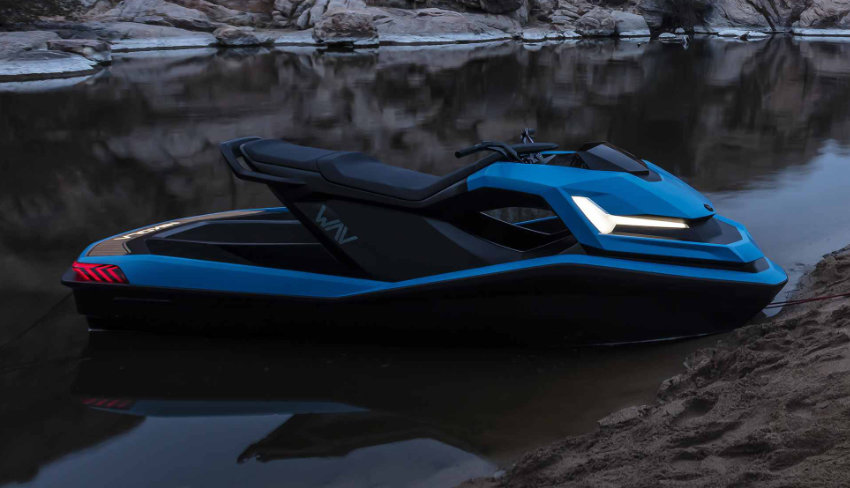 The Nikola WAV ePWC is developed by Nikola Motors Corp.from Phoenix, Arizona. The manufacturer is known for its electric trucks.

The design of the Nikola WAV (pronounced "wave") electric jet ski two-seater was inspired by so-called superbikes, high-performance racing motorcycles for deep pockets. Everything looks futuristic and luxurious. There's the 12-inch 4K display, for example, which is designed to keep riders up to date with all the important technical data. Nikola Motors company president Trevor Milton calls the project the "future of personal watercraft."

This project was accelerated by the purchase of the company Free Form Factory, which had previously presented the Gratis X1 electric stand-up Jetski. Nikola Motors has quite a lot of experience with electric vehicles, because their main business is the electric trucks TRE and TWO. The electric trucks have power ratings of up to 735 kW or 1,000 hp. That's a lot. In addition to trucks, the team deals with recreational vehicles. These include the Badger pickup with 960 hp, the NZT off-road buggy with 590 hp and the RECKLESS military vehicle, also with 590 hp. All vehicles are powered completely electrically.

So there should be no lack of experience with high-performance electric motors and battery technology. However, there are still a few hurdles to overcome with a watercraft. All components must be seawater resistant.

As is often the case, only prototypes of this electric jet ski can be seen so far. The manufacturer is also keeping a low profile with technical data. So far, you can only see image videos in which the ePWC is not even driven. Neither the power of the motor nor the range is specified so far. Instead, the focus is on features like an infotainment system or storage compartments.

At the very least, the company should have enough experience and also budget to bring an electric personal watercraft to market. When that will be, however, is hard to say.