Back to overview
eFoil
Test reviews
Audi Jetfoil in the waves - Jet vs. folding propeller vs. TrueGlide 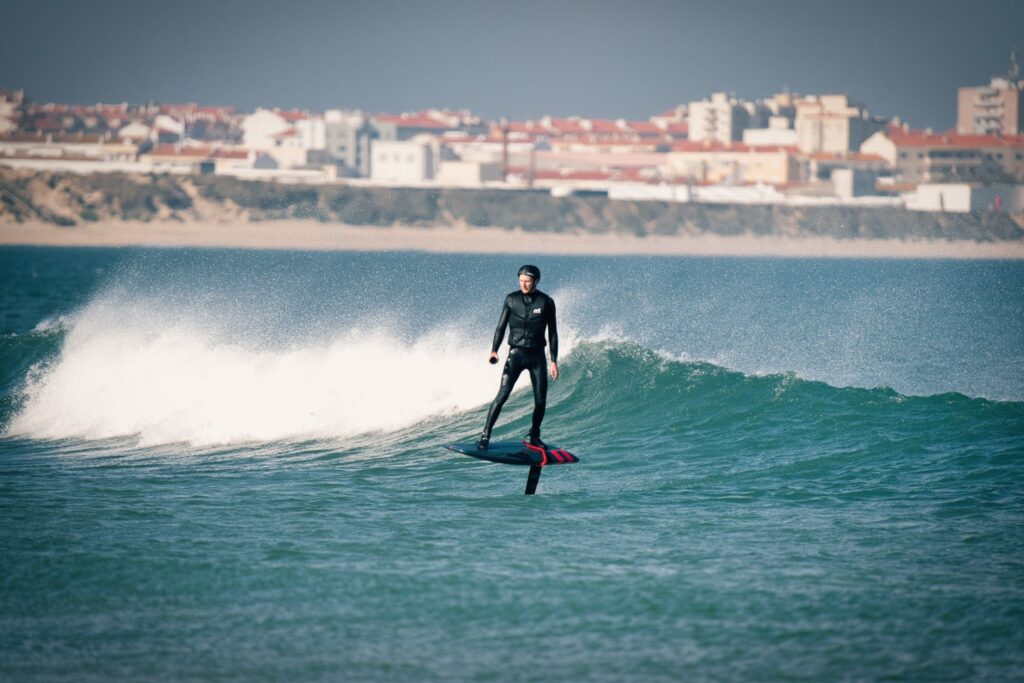 For a long time, people have been asking whether the Audi Jetfoil can be ridden in the waves without the motor turned on. We tried it out in Portugal and now compare jet with propeller solutions.

eFoiling in the waves

Experienced eFoilers ride in the waves without the motor turned on. Whether in the ocean or behind a boat, they use the power of the wave to move the board forward. They leave their finger completely off the throttle and sometimes let themselves be propelled hundreds of meters only by nature.

For this, Lift Foils offers the folding propeller that collapses when you take off the throttle. Fliteboard solves this use case with the TrueGlide propeller. A propeller that spins freely, reducing water resistance.

But what about the Audi eFoil? There is neither a foldable - nor a TruGlide prop and yet it is possible, as you can see in the picture above. I met the Audi team - together with Mike from Jetsurfingnation - at Baleal in Portugal for surfing. This is Mike's home territory where he rides his Lift with the folding prop. Also along for the ride was Pedro, who surfs the Fliteboard with TrueGlide in Portugal.

So two absolute experts for waveriding in Portugal. Unfortunately the weather was not really ideal with strong offshore wind and mediocre waves. But the 1 to 1.5 meter waves at least allowed to dare a first comparison. More about this in the following video:

Even if the conditions were not perfect, we are glad to have done the test and to be able to prove that the Audi Jetfoil can be ridden in the waves without the motor turned on. It was even possible to pump a few meters😉

The Audi Jetfoil has a very small diameter drive. Smaller than other Jetfoil solutions such as the Awake VINGA, Jetfoiler or Takuma. It is the first eFoil that could ride the waves without separate accessories like foldable propeller or TrueGlide. This doesn't mean that the other Jetfoils can't do this, but the smaller diameter might offer an advantage.

It was even possible to pump a few meters without engine power as well as to surf sitting down. All riders confirmed that it was easier to get the waves with the Jetfoil, as the speed could be regulated more smoothly.

The Audi team currently has four wings in the program. So far, all of them have a High Aspect design. In 2023, the Audi Team would also like to launch wave wings. These will then kind of resemble the cruiser wings of the other manufacturers.

So, how does the Jet vs. Foldable Propeller & TrueGlide perform? The opinions of the two test riders Mike and Thomas were very similar and also seem logical.

Lift Foils has the edge when it comes to efficiency. When the propeller folds up, the folding propeller offers the least water resistance. The TueGlide propeller (when set up well) is slightly ahead of Audi's Jetfoil. Nevertheless, the pictures show that all three solutions allow riding off the waves.

When it comes to difficulty level, the Audi Jetfoil has the edge. In general, the Jetfoil drives are known for their smooth riding style. This makes it easier to approach the waves, since you can regulate the speed continuously. Even if you are already in the wave, you can continue to adjust the speed. Thus, it is easier to catch the perfect part of the wave and you can adjust the weight shift more slowly.

With the foldable propeller, on the other hand, you have to immediately let off the throttle completely so that the propeller collapses. As a result, you also have to adjust your weight shift immediately here. This requires more training.

Fliteboard is again in the golden mean with the TruGlide solution. The fact that the TrueGlide propeller does not have to be unfolded or folded makes it seem a bit smoother.

Lift Foils folding propeller only has two blades. This makes it not quite as efficient as the standard Lift propeller or the TrueGlide propeller from Fliteboard. So ideally, if someone doesn't ride waves every day, they will have to switch between propellers. While Lift has just launched a quick release for this, it still takes more time.

With the Fliteboard, on the other hand, you do have to invest in an additional propeller, but since it also has three blades, there's no need to switch. And with the Audi Jetfoil, you simply use the standard solution.

All three solutions are suitable for surfing with the eFoil. With a Jetfoil, this has finally been proven. If someone surfs the ocean waves every day, like Mike and Pedro from Portugal, then Lift is probably slightly ahead, at least for this use case. But Pedro for example, still prefers the Flite solution.

However, you have to be a very good rider and invest time to master the foldable propeller. Fliteboard, on the other hand, is the only manufacturer that has the option to mount footstraps. This is only recommended for really very good riders, but makes surfing in the waves even more radical. It's easier with the Audi Jetfoil. For our testers, the simplest solution.

But of course, most people don't just decide based on how they ride in the waves. There are many other reasons that play a role in the eFoil purchase. These include safety, workmanship and the latest technology. We have already gone into this in multiple videos from the E-Surfer YouTube channel.