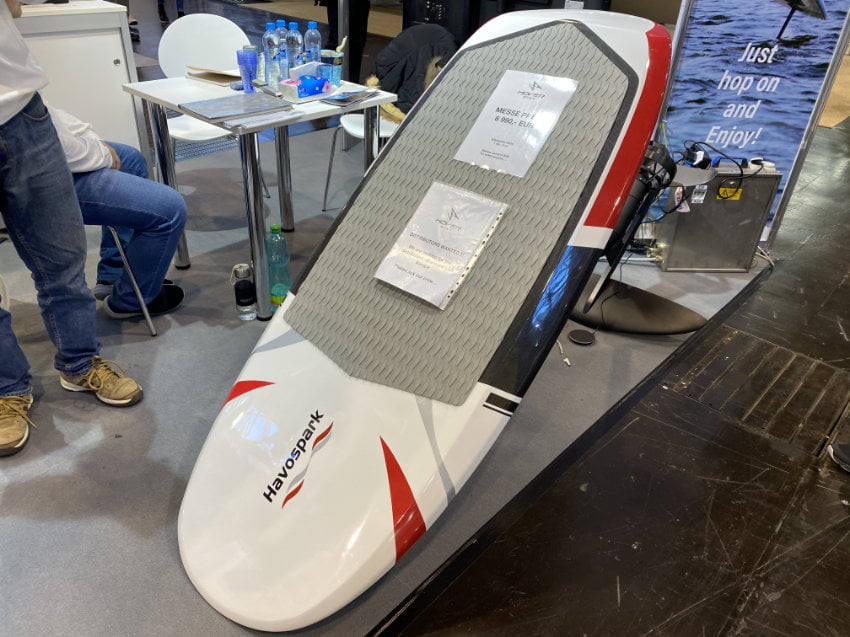 Hoverstar was exhibiting several water toys at boot in Dusseldorf this year:

Plenty of gear on such a small booth, but of course we focused on their electric hydrofoil Hover Foil H5. What is kind of unique (we heard there is one other Asian vendor doing it this way) is that the battery compartment is underneath the board. An advantage could be that they have a more even board on the top by doing this. However, they explained that thew reason for this approach would be that it would be easier to change the battery by putting the board upside down, because the board is more stable compared to standing on the wing and the top of the board. This makes kind of sense, but the downsize is that to keep the board underneath even the compartment lid is mounted with screws which makes it more difficult to change the battery.

According to their brochure the Hover Foil H5 board has a top speed of 35 km/h or 22 mph which can be controlled with a PLUS and MINUS button (10 speed levels). The weight shall be 30 kg including the battery at a length of 180 cm. 1.8 m is huge and therefore the board is addressed for beginners. The 30 Ah lithium ion battery has a weight of 13.9 kg and is supposed to be good for 40 - 60 minutes riding time. Charging time of 1-2 hours sounds too fast, but this might explain the short riding time (a small battery?). They did not show the charger or battery at the show. The motor has 5 kW power. I found the mast looked pretty long and Richard mentioned it would be about 1m. The brochure mentioned a maximum height of 70 cm above the water.

The price of the Hover Foil H5 electric foil is 7.499 EUR plus VAT and shipping and it can be ordered on their website.  guess when they start shipping? We have this heard year by year from so many manufacturers. Shipping will start from April/May. Let’s see ...

One thing I found confusing is that they use the name Hoverstar for their website, but the brand on the devices was Havospark. Thy have an Havospark website as well. I reached out to the Hoverstar team and got following explanation: The name "Hoverstar" is the company name, but in some regions outside of China there is a trademark issue with this name. This is why the product is now called "Havospark", but the company remains Hoverstar.
TRY BEFORE YOU BUY
If you are not sure which board you should buy, visit our test center in Berlin. Make an appointment online by filling out our contact form.
Share article