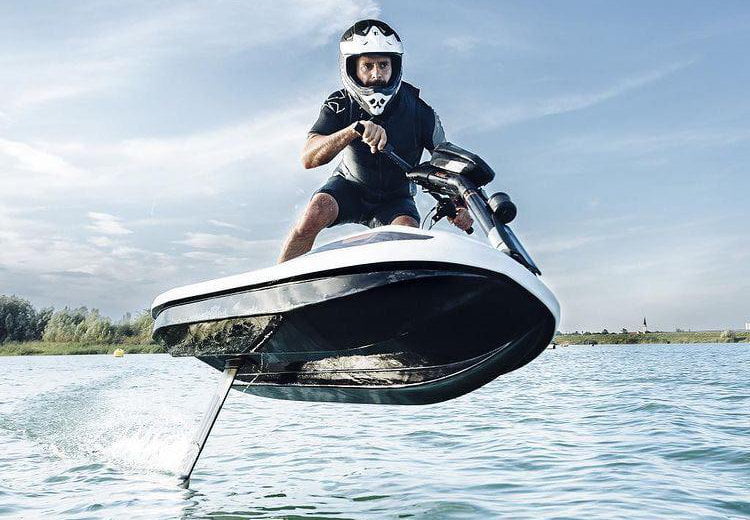 The hydrofoil e-Jetski Flyway is a new project by David Vukovič , who has already launched custom made eFoils and electric hydrofoil accessories under the name Flying Rodeo.

Just like the eFoils, the stand up water motorcycle with electric motor uses a propeller drive and not a jet drive, so HighFly Watersport calls it a water scooter. Still the Slovenian manufacturer is keeping quiet with exact technical data and also the website describes the product already as "sold out", but we are in contact with David and will update this article with any new updates.

Originally we had an appointment with David in Croatia at the end of October to see and test the Electric Hydrofoil Jetski Flyway. Unfortunately, the meeting was canceled at short notice. Too bad, we would have loved to test the Hydrofoil Jetski ourselves. But it should happen in spring at the latest.

In the following video you can see the electric Hydrofoil Jetski from Slovenia live in Croatia. Looks like a lot of fun and even jumps can be seen:

The price is currently stated at 14,500 EUR plus VAT and shipping. That the Flyway was already sold out after 2 days, speaks for the fact that only a small number will be produced in 2022. This is already known from other electric jet ski manufacturers. Because e-jetski manufacturers like Narke or Taiga Motors have been delaying delivery for many months. Customers who have already paid are put off again and again.

The main reason for this is the huge power and thus the large batteries needed for an eJetski. This is where the Hydrofoil eJetski could score. As we have already learned with the eFoils, the vehicles powered by an underwater wing consume up to 70 percent less energy as soon as the watercraft takes off. This is due to the fact that there is hardly any water friction and no displacement when the vehicle is in a floating state.

There are to be two models of the Hydrofoil e-Jetski Flyway, the "Classic" and "Premium". However, it has not yet been published where exactly the differences lie. The Flyway is not controlled with weight shifting as with an eFoil, but with a handlebar that actuates a rudder.

A display on the handlebars shows the rider the speed and battery consumption. A Bluetooth speaker is also built in, so you can listen to music via your smartphone. The Flyway is said to be easy to dismantle for transport. A jet ski for the trunk?

The videos and photos of the Flyway certainly look very promising. We were already able to test the Overboat Hydrofoil jet ski in September, as you can see in the photo below.

Although the Overboat was interesting as a one or two-seater, the stand-up eJetski from HighFly Watersport seems a lot more fun. Jumping and rapid maneuvers were not possible with the Overboat. It's more of an elegant glide.

Interestingly, HighFly Watersport talks about the Stand Up eJetski being suitable for families as well as adrenaline junkies. Given the pictures, I would have guessed more towards the second target group. We are already looking forward to the first test ride.

More info about the Hydrofoil e-Jetski Flyway in our forum.