Back To Overview
Jetboard
Jetsurf Electric S and more 2019 news 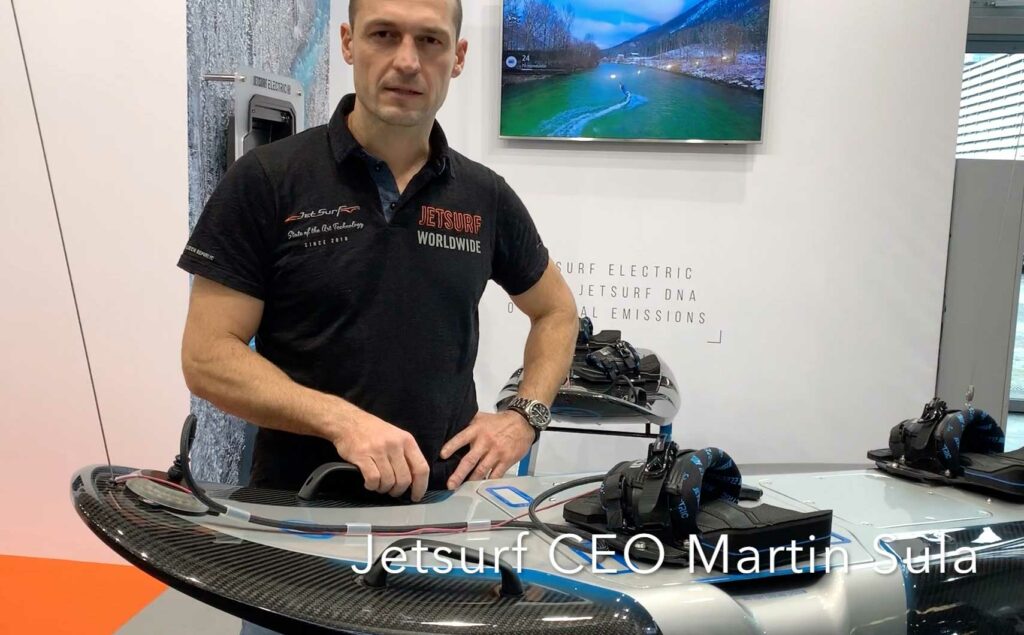 The Jetsurf Electric S models models were presented to us last week at the boot 2019 from CEO & Founder Martin Sula.

We also had a look at the 2019 petrol powered jetboards.

Martin Sula himself was at the boot show in Dusseldorf Germany and explained us his Jetsurf Electric 2019 models.

Jetsurf is planning to release two electric jetboards later in 2019. The Jetsurf Electric and the Electric S.

Update: We now own this board and shared our experience in the Jetsurf Electric review.

The S model is designed for Intermediate and advanced riders while the standard model is ideal for beginners and intermediates.

Both models have the DNA of the 10 years experience with petrol powered JETSURF models. They are using a similar shape and engine.

Both Jetsurf Electric 2019 models have the same carbon fibre body and weigh 29 kg.

Also the drive unit and battery are the same.

However the Electric S jetboard is with 55 km/h 5 km/h faster and offers more torque.

The suggested riding time is 25 min compared to 35 minutes for the standard model with one charge.

The charging time of the S model takes with 1.5 hours only half of the time.

The sealed batteries are cooled with water while riding and with the S model even when charging the battery the special quick charger is using water for cooling.

The Jetsurf Electric 2019 models can switch in either ECO mode for longer cruising or BOOSTER for more performance.

Of course there were also news about the petrol powered jetboards.

The Race DFI and the Adventure DFI. The Jetsurf Adventure is designed for longer trips and has a rack at the top of the board.

This rack can be used to attach a bag to carry items or a second fuel tank which extends the journey for up to 3 hours.

Martin explained us that his company is planting a tree for each Jetsurf sold and over the life time of  the tree the emissions of a Jetsurf jetboard used 1,000 hours will be eliminated.

As such they claim emission zero for their combustion engine motors.

The new engines are also more silent and bring down the noise to 59 dB.

Another new feature was the Jetsurf TUBE and inflatable ring around the board which makes it very easy for beginners to ride the jetboard.

It is also ideal for families and can carry up to 2 adults.