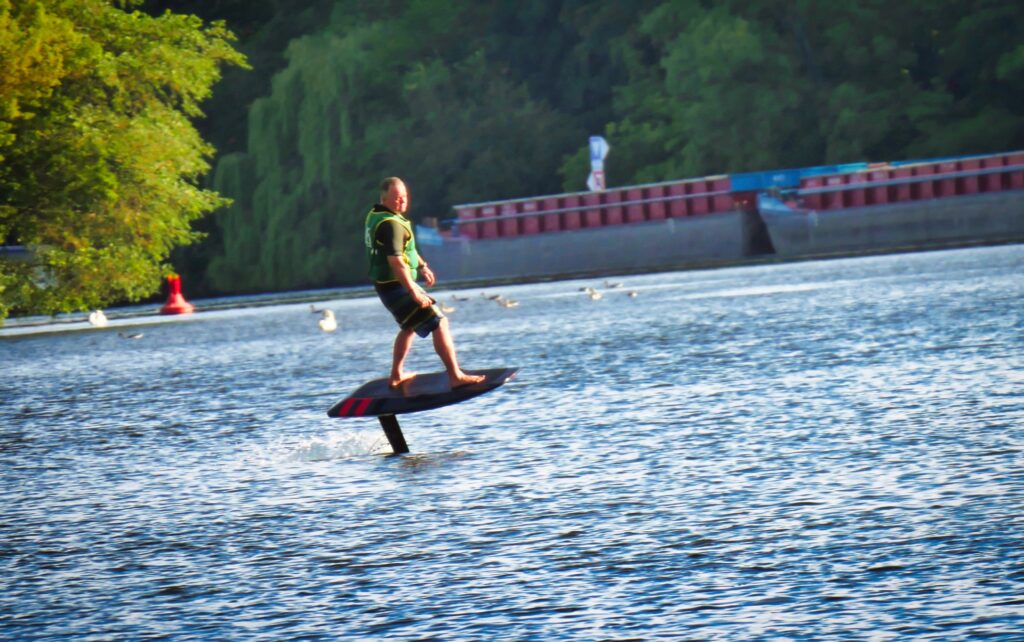 I've been following the Audi eFoil since its debut at CES in Las Vegas 2018, where I was on site myself. I was allowed to ride the first prototype in May 2019 and the first production board in November 2021.

For the Audi e-tron foil review, we got a prominent visitor from Portugal. Mike from Jetsurfingnation visited us in Berlin, where the following video was recorded:

Back to my own Audi e-tron foil review. I picked up my first Audi e-tron foil in person from the factory in Bavaria in mid-February. I was explained the production process and given insights into the technology.

Of course, components come from all parts of the world, but the foils are designed and assembled in Bavaria. Made in Germany. We also captured this visit in a video:

The Audi eFoil was the first jetfoil I was able to ride. In the meantime I was able to review a second prototype with jet drive (I can't reveal the name yet) and next week the Awake team from Sweden will visit us so I can test the Awake Vinga. I've also heard from other manufacturers that more jet-powered eFoils are coming to market in 2023. Are jetfoils the new trend? I think so.

It took a long time for the first production eFoil with jet to hit the market. The Aerofoils team did it first. Congratulations to Franz, Chrissi and the whole team! For a long time, there were concerns that a jet-powered eFoil would not be efficient enough to compete with open propellers. And indeed, the Audi prototype I was able to test in 2019 had problems getting me to planning.

That is no longer the case in this the Audi e-tron foil review and test report. The Audi eFoil makes me planning without any problems, not only with the standard board, but also with the short performance board, which I have been riding for a week now. The smart engineers from Bavaria have done it.

How does it ride?

Now that I've been able to ride two Jetfoils, soon to be three, I can say it feels different. This is also confirmed by Mike from Jetsurfingnation who has ridden the Audi Jetfoil as well as the Vinga. One term is mentioned again and again: It's smoother. But what does that mean? Well, eFoils with an open propeller are much more sensitive to trigger movements on the remote. With traditional eFoils, if you take your finger off the throttle too abruptly, you'll usually crash, because a slow propeller slows you down considerably. While the large propellers create a lot of water resistance when you let off the throttle, this is not the case with the narrow jet drive. It virtually glides along and slows down much less.

This makes it possible to "play" more with the throttle. We noticed this again and again in the Audi e-tron foil review sessions. In connection with the special high-aspect wings of the Audi eFoil, which cover a very wide speed range (about 24 to 40 km/h with my 90 kg), you therefore have a lot of leeway and it is possible to regulate the speed pleasantly smoothly.

This different driving behavior takes a little getting used to in the first few minutes, but is then really fun. The Audi eFoil doesn't accelerate as aggressively as a Lift or a Fliteboard, for example, but when it does, it does it right, and I keep catching myself going just under 40 km/h on the speedometer. The speed is easy to read on the large color display.

I really enjoy the Audi eFoil! This is also due to the long mast. With 80 cm effective mast length, it is the longest of the eFoils. And there is another innovation on the Audi eFoil. The board has two antennas. While other eFoils lose contact with the remote control when the tip of the board is underwater, this one has another antenna in the rear part of the board, which prevents radio interruptions.

With the gearless jet drive, the Audi e-tron foil is barely audible. Ideal to enjoy the nature.

The main reason for the development of the Jetfoils is the issue of safety. While accidents with the open propellers of traditional eFoils are very rare, especially if you've done proper training, when an accident does happen, the consequences can sometimes be dramatic. Also, the braking effect of the propeller described above often causes beginners to ride more erratically (uncontrolled up and down), which then leads to more falls.

With a jet drive, the ride is not only smoother, but it is virtually impossible to get at the impeller with a finger or toe. Audi therefore calls its drive "Fully Shielded Propeller". In countries like Canada, propeller-driven surfboards are not allowed, so I'm sure the Jetfoils will catch on now that the efficiency hurdles have been overcome.

On the subject of safety, the Audi eFoil, unlike Lift Foils, for example, the motor is always locked at the start and after each fall. You first have to arm it with the down button. Since this is only one keystroke, it is not a nuisance. Even though there is no danger from the jet drive like with the propeller, an accidental release could lead to a collision with an object or even people, for example.

The Audi eFoil is also equipped with GPS and gyro and switches off independently in the event of a fall.

Another hurdle due to the aforementioned efficiency concerns with the early jetfoils was range. But here, too, the engineers from Bavaria were able to eliminate the problems. The Audi battery, weighing 13.2 kg (13 kg for Lift & Flite), also offers 90 to 120 minutes of range with a similar size. But as with the car, if you only ever drive at full throttle, you won't achieve this range. Not with any eFoil. After all, eFoil is (at least not always) about top speeds above 50 km/h.

While this is possible, even with the Audi e-tron foil, for me eFoiling is more like snowboarding in powder snow, while jetboards are meant for high-speed driving. However, one should not look at this in black and white. Tastes are different.

One highlight of the Audi e-tron foil review is the Audi hand controller. No other remote control has such a large and sharp color display. It not only looks great, but also offers a lot of useful information. The color of the ring lets you know which of the 3 modes you are in at all times:

In each of these modes, you have 10 speed settings that you can adjust with the up and down buttons, which are then indicated by the colored ring. You have 30 virtual gears, so to speak.

During the ride you can see a large speed display, as well as the battery level (main battery and remote control), time, ride duration and distance traveled (alternatively the energy consumption).

On the display are further after the ride many statistics available, such as:

The hand controller informs the driver via vibration when a certain battery level is reached, for example at 50%.

The remote comes with a generous power supply with magnet contact. This one particularly intrigued me not only in the Audi e-tron foil review, as you can see in the unboxing video below 😉

With Audi as an investor, providing the 4 rings and the Audi e-tron logo, the Aerofoils team had to meet the highest standards. In my estimation, this has also been achieved. The boards not only look great, they are also very high quality down to the last detail.

Everything feels very high quality and after 4 months in use we could not find any defects. The board is simply "Made in Germany".

You can also see this quality in my unboxing video:

Last but not least in the Audi e-tron foil review, the new performance board. We were lucky enough to get the first performance foil from Aerofoils. It has the serial number 1 😉 This is a shorter version of the board. Unlike the standard e-tron foil with 176 cm length and 72 cm width with 105 liters volume. Has the performance the dimensions 153 x 66.7 cm with 83 liters.

The Standard board can be compared to the Lift Foils Cruiser or the Fliteboard Standard while the Performance board is aimed at sportier riders. The difference feels similar to the shorter Sport & Pro models on Lift and Flite.

Here's a short video about it:

So far, all Audi eFoils have been delivered with the standard wing the Aero 1300 Freeride. This high aspect wing covers a wide speed range from 22 to 42 km/h and rides a bit more sensitive than the standard wings of other manufacturers. But it is really fun.

Soon there will be more front wings like the Aero 1100 Freeride, the Aero 900 Freerace, and the Aero 700 Race.

The Stabi 400 is currently being delivered as a stabilizer, but shorter models are also on the roadmap with the 380, 300 and 200. The number indicates the size in square centimeters.

As you have probably already read, I am quite fascinated by the Audi eFoil. I really enjoy riding it, the technology is state of the art and the quality is impeccable. A great board.

Of course you can get the Audi e-tron foil including all accessories in our eFoil shop. For further questions please visit our forum or just call us.

You want more videos of the Audi eFoil? Okay, we have one more! Enjoy ...