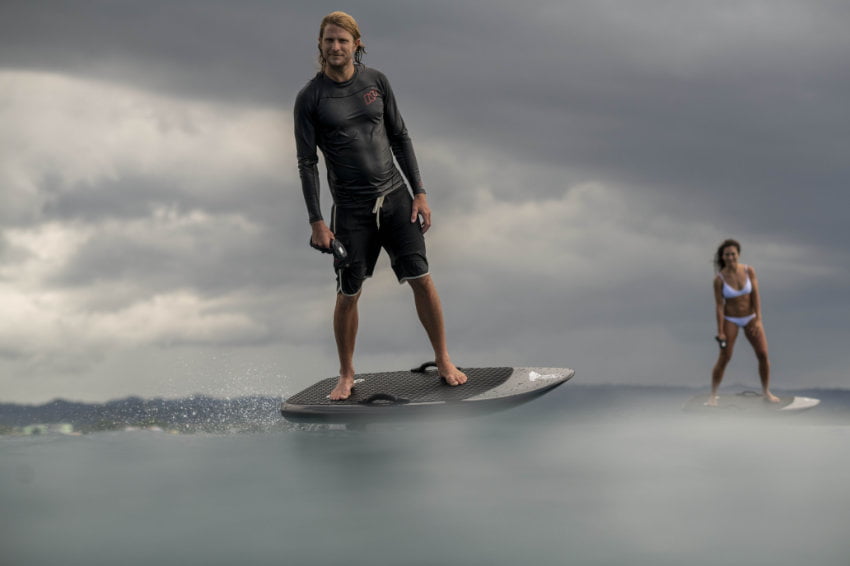 With the Lift e2 Lift Foils introduced the second generation of their electric hydrofoil already some time ago. But the team around CEO Nick Leason continues to make improvements to their boards with additional options and software updates.

The Lift Foils e1 eFoil was the first commercially available electric hydrofoil in the market and started selling in April 2018. Lift sold about 1,000 boards the first 15 months and by now we believe they have still sold more eFoils than all other brands together. With so much customer feedback Lift was able to launch an improved Lift e2 end of 2019 which they continue to improve via software updates and additional wings which let riders fine-tune their experience. BTW, we sell the latest eFoils in our efoil shop.

One of the latest Lift e2 updates were the high aspect wings as Nick is explaining below as well as a software update for the remote control which has now 15 speed settings.

Okay, let's get started with the interview of Nick Leason.

We did our first interview with Co-Founder Nick already in July 2017. Now 3 years later it was time again to check in with him.

1. Nick Leason, when was the first Lift eFoil delivered and how many did you ship until today?

The first eFoil was shipped in April of 2018. I don’t like to quote the numbers anymore for the public, but its well over 2,000 units and growing quickly. We have a lot of experience and refinement in our designs.

Again; I don’t like to publish my plans, but we’ve invested a lot of time, money and staff in being ready to meet the years demand; which so far is working out well. It should be a very good year for the growth of the Lift eFoil.

I think the whole world has felt an impact from the Covid disaster. We have manufacturing in China and for that reason, our dilemmas began early in 2020. Then the manufacturing shut downs migrated to the United States. It has made it more challenging to build the inventory needed for the summer season, but my team and suppliers are the best so we have managed to overcome and make it happen. The public has been  persecuted by their governments and in many locations of the world, they have been arrested for accessing the ocean and exercising. That’s crazy and I’m sure that it has had an impact on demand. It's not exactly motivating to go out in the water when you are being chased by police by land, sea and air. Regardless of the madness, there has still been a steady demand going into the summer and people are excited to get out and surf. I feel terrible for those that have lost their businesses entirely and their rights to exercise in the great outdoors and for that reason, I can’t ever complain  about our situation, we feel very lucky.

4. Is the 2020 portfolio set or will you launch new products this year?

The main portfolio for 2020 is set as of last fall, but we are always launching accessories and speciality items. For example, I have a whole new lineup of high aspect wings, which are awesome and crazy efficient. You can take your existing ride, change the shroud for a tail cone and slap on a hight aspect wing to bring your battery efficiency up by about 50%. That’s huge!
I also have a few specialty items that I have been working on that will show a new future in eFoiling. Stay tuned for that.

5. What is the next product on your roadmap after the Lift e2?

We continue to improve our eFoil lineup for performance, longevity and cost. I also have some new and amazing projects in the works that will not be disclosed until its time to disclose them. In 2021, you will see a surge of efforts that we have been developing throughout this year and beyond.
For now, we have the largest lineup of hydrofoil products to suit every type of rider in the market. The product is working great.

6. Our recent research showed that some countries such like Switzerland, Canada and parts of Southern Germany have banned electric surfboards and eFoils. Most countries though seem to allow them, but users need to register them and carry a plate with a unique number from the local authorities. Do you have any additional data from other parts of the world?

It's been challenging in certain parts of the world and quite frustrating really. It basically comes down to the decision of one person behind a desk to decide the surfing fate for all of his or her fellow citizens without proper reference. I don’t know if you can tell, but I’m quite disturbed with governments telling us that we can’t go out and surf.  I mean, who’s committing the crime here?

Unfortunately, I don't have a lot of pull in these foreign countries, but local citizens in these restricted areas need to start to demand their freedom of sport and not take no for an answer.  Our eFoils are such a positive evolution in personal watercraft. They’re quiet, clean, slow (compared to a Jet Ski) and with thousands of units out in the world we have data to show that they are perfectly safe! It's like an electric skateboard for the water; what’s the big deal?   These countries need to wake up and get loyal to the foil.

7.How much staff do you have world wide and were are they located? What is your strongest region?

We currently have a lot of people working on the Lift project. When you gather up the design, production, office and sales teams, there is a huge amount of effort being put into the growth of this great sport. At the moment, we have about 150 affiliate locations across the world where people can go take a proper lesson on how to ride an eFoil. I’ve spent my life teaching people how to surf, windsurf, kite and hydrofoil. A proper introduction is such a beneficial tool to the growth of the sport so I’m very happy with the network that we have been creating. Not to mention that our customers really get the proper support that they need.
Our strongest region is definitely the United States, but we have quite the developed team in Europe as well. Lift has really grown roots across the world.

8. What do you think about gyro balanced electric hydrofoils?

It's an interesting concept, but for eFoiling it could potentially complicate the build and increase cost due to more mechanisms. The truth is, some of these larger wings are quite stable and the body is the best gyro of all. That being said, it can be done so it will be done and we will have to evaluate then. My guess is that anyone who enjoys the ride, will go manual.

9. By when do you think the price of a premium e-foil like yours will be around 5,000 USD?

Premium eFoil at $5,000. That's not realistic for many years to come and any business advertising that type of product right now is destined for failure because they don’t even know their own cost. Can you potentially build an eFoil at 5K? Sure, but would it be the same as what we have on the market right now? It would not. As I said earlier, stay tuned to the future.

Thanks a lot, Nick Leason.

Last but not least we also want to share the  interview from our friend Mike at Jetsurfingnation with Nick:

For further questions about the eFoil e2, please visit our forum. Please check out our 2021 eFoils wings.