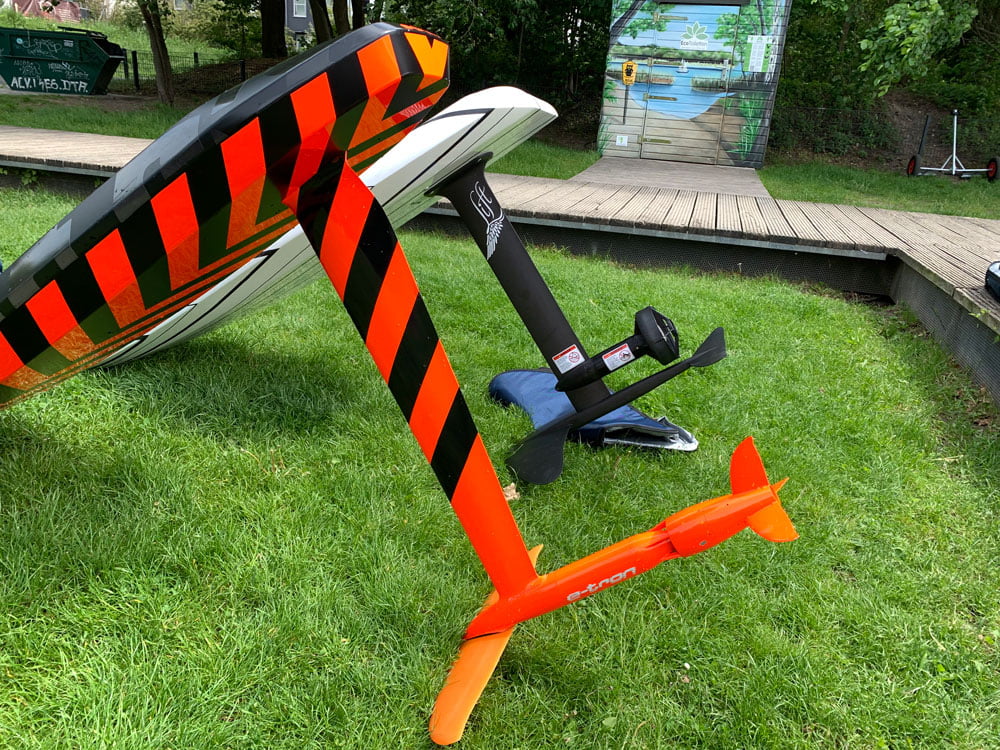 The Audi e-tron hydrofoil developer team visited us for a tour in Berlin where we could compare the jet-powered e-Foil from Audi with the eFoil from Lift. The Lift eFoil is a mass production electric hydrofoil shipping since summer 2018 while the e-tron hydrofoil is a prototype. So this comparison is not about the details, but about the different concepts.

It would be too early and not fair to do a full review of the Audi e-Foil as it is not on sale before 2020. It is an early prototype to test different shapes and technologies. Nevertheless the team had a lot of fun riding the board. The biggest difference between the two e-hydrofoils is the propulsion. Most e-Foils such like the one from Lift Foils are using a propeller, but the team from Bavaria is using a jet engine.

I was surprised how silent the jet propulsion was. I had expected that it would be much louder than the propeller engine, but it was about the same. Propeller propulsions have a higher efficiency level though and the e-tron prototype we tested was designed for riders below 80 kg. I was able to surf on the surface, but was too slow to fly with 92 kg. Very soon the team will have a version for heavier riders and I am looking forward to meet them again to ride this one.

But it is not only the propulsion which is very different also the board itself and the wings follow another concept. The current e-tron board is 28 kg including batteries which is 2 kg less than the board from Lift Foils. The new larger board from the Audi team will be even 4 kg less. They are however using less battery cells in the moment with a basic housing, so it would be too early to estimate the final weight of a mass production board.

Both developers Franz and Christian are below 75 kg and this why the current early boards are designed for such riders. The wings are much smaller compared to the 170 wing we used on the eFoil. The largest wing they currently have is comparable in size with a 150 wing from Lift. Lift goes up to 250 for beginners and schools. You can see on the pictures that the shape of the wings is very different. What you can not see on the pictures is that the Audi wings have more profile which shall result into more boost and would justify smaller wings.

In the picture below you can see the current three wings from Audi. In the background is the smaller one in orange, followed by the second largest in orange in the front and the largest one in black.

The battery packs, the housing and the remote control are still very basic as you would expect from a prototype. These details can be figured out once the basics are finalised. The team is currently using the water-proof remote control Maytech MTSKR1805WF for 249 EUR. According to Franz the quality is soso, but they will develop their own remote anyways.

The e-hydrofroil may be not launched under the Audi brand. Franz is an engineer at Audi and the company thinks it is currently a good fit for their electric mobility strategy. This is why they are showcasing the e-tron  hydrofoils on shows and events. Audi is also supporting Franz and Christian with technical know and and resources. The two guys however founded their own start-tup called Aerofoils GmbH to bring the product to market.

We made a short video where you can see the Audi e-tron hydrofoil in action and riding next to the Lift Foils eFoil. Have a look:

We will also post further pictures in the forum.