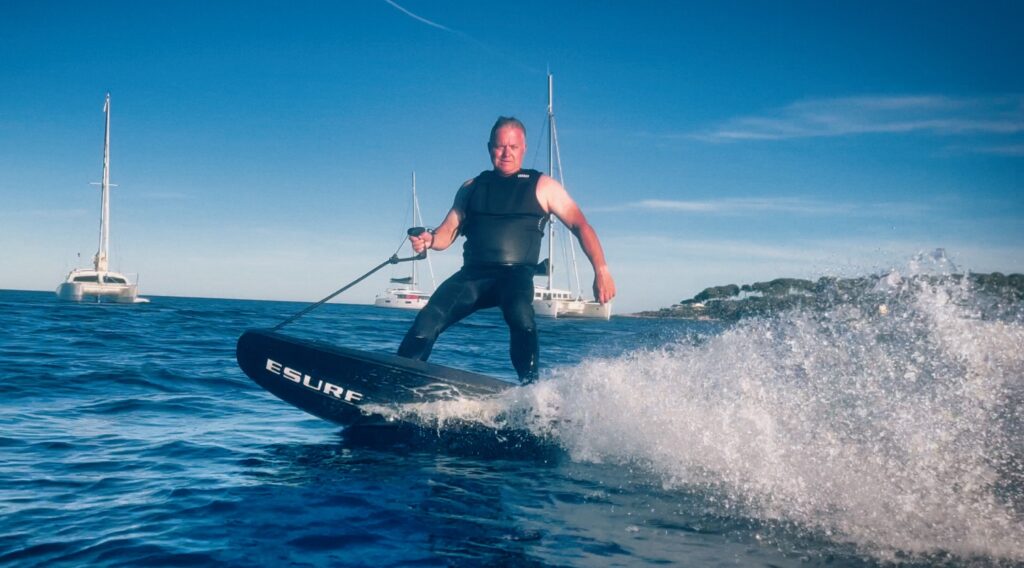 We know the ESURF Jetboard for quite a while, but after Pro Surfer Kai Lenny rode the board, we had to test it again 😉

We were already in contact with the original ESURF founder Alexander Frederiksen in March 2018, when the jetboards were still in the prototype phase. He later sold the entire project to a dealer in Monaco who specializes in supplying luxury water toys to superyachts.

Note: By the way, there was already a board from the Chinese brand Mertek called "ESurf S1" before, this was then renamed EasySurf. More about this board in our article "EasySurf S1 - cheap electric surfboard".

After that it became quiet around the ESURF Jetboard. But recently, the now Monaco-based owner became more active on social media again - especially since pro surfer Kai Lenny is experimenting with the jetboard. You could already see the first backflip of Kai with the ESURF. More from Kai is to come soon.

This was reason enough for us to visit the ESURF team on the Côte d'Azur and test the jetboard ourselves. In September 2022 - during the Cannes Yachting Festival - we met with Tom from ESURF on a beach in Antibes. There he described the ESURF board as well as the eKart to us in detail - as you can see in the following video from the E-Surfer Youtube channel:

I really had fun this afternoon with the jetboard from Monaco! Unfortunately, I lost my Insta360 camera during the test rides. Therefore, for the video remained only shots from the iPhone in a protective case 🙁

With 25 kg total weight, it is one of the lightest jetboards on the market. It not only looks very similar to the Jetsurf electric, but also rides about the same. The board is made of a carbon fiber monohull (one piece), which makes it really extremely light at only 10 kg.

At 64 km/h, it is also one of the fastest e-surfboards on the market. The range is said to be up to 45 minutes. This is due to the very powerful plug-and-play battery with 3.2 kWh. While I didn't run the stopwatch during my test ride, I felt the range was very good.

The team from Monaco positions the board for both beginners and advanced riders. Even for kids as an eKart (more on that below). In fact, I found the board very easy to ride and at the same time strong acceleration and radical maneuvers were possible. Although I do not have the skills of Kai Lenny, but it was really fun!

The board rides similar to the Jetsurf electric and the WaveShark jetboard. However, I liked it better because it is much lighter than the Waveshark board and requires less effort to assemble and disassemble the board compared to the Jetsurf.

Other jetboards in this category would be the Awake Boards or Radinn. However, both of these boards do away with a wired handle and use a wireless remote, which I personally like better because both hands are free.

Tom from ESURF always emphasizes that they want to make it as easy as possible, especially for yacht crews on superyachts. Many details are optimized for use on such yachts. For example, the stackable battery boxes.

The battery was quite easy to insert and is fixed in the board via a single twist lock in the middle of the battery. The board then starts automatically. After that, you just insert the two fins and put the safety pin (kill switch) into the remote. Then you are ready to go.

The remote control does not use radio, but is firmly connected to the board by a cord. So the board is driven with a fixed rope and handle. With only one trigger, the menu is also operated, for example, to switch between the three speed modes (Low - High - Boost). The low mode is for children. In high mode, the speed is limited to 50 km/h, and in boost mode, up to 64 km/h is possible.

To operate the menu, remove the safety pin (kill switch) and briefly press the trigger to move from menu item to menu item. With a long press you select. Since there is no back button, pressing the trigger briefly moves you through the menu like a clock hand. This may take some getting used to at first, but it is simple. The remote vibrates when the main battery is running low.

Thanks to a support mat and a tube, the Jetboard can be converted into an eKart. According to the manufacturer, this is the first go-kart for the water. The driver sits on the board on an integrated cushion including a small backrest, just like in a go-kart. He holds on to a handle in the middle of the mat with one hand and accelerates the eKart with the other hand via the remote control. You steer by shifting the weight. It's a lot of fun, but mainly intended for children.

The tube can also be used without the mat and thus allows beginners and children to ride the ESURF Jetboard with much more buoyancy. Similarly, this has already been seen with Jetsurf.

Since the ESURF is mainly sold to superyachts, which in turn are often chartered out, the aim is to offer fun with the Water Toy to as large an audience as possible. From young to old and from beginner to pro. Therefore the Tube and also the eKart mat makes sense here.

The hollow carbon fiber board weighs only 10 kg without battery. This is very light. Together with the 15 kg battery with 3.2 kWh, that makes 25 kg. The range is given as 45 minutes. The battery charges for 2.5 hours for this. The top speed can be up to 64 km/h. Here's everything at a glance:

Due to the 19 kW power, the board requires a sport boat driver's license in some countries like Germany.

So indeed not quite cheap, but with the focus on superyachts probably no problem.

An ESURF Karl Lagerfeld Jetboard Edition has just been announced. The KARL LAGERFELD X ESURF, designed by Sébastien Jondeau. This limited edition product is an electric surfboard that features KARL LAGERFELD lettering, the 21 Rue Saint Guillaume logo, an iconic red frame around the board, and Sébastien's signature.

This limited edition board is currently available for pre-order. A price is not yet known.

It is definitely fun to ride the ESURF and I found it to be very easy to handle. The quality makes a very good impression, which is to be expected at this price.

However, the board is only manufactured in small quantities. Thus, ESURF does not have a dealer network and thus no local support. Although the board is offered globally via the website, the focus seems to be locally on the superyachts of the Côte D'Azur.

It is not clear if there have been any significant advancements from the new owner or if the jetboard is still pretty much the ESURF of 2018. At this time, our friend Mike from Jetsurfingnation has already made a video about the board:

It remains to be seen whether ESURF will offer larger quantities and a local dealer network in the future. Then it would be a real alternative!

What do you think about the ESURF? Please share it in the forum at: forum.e-surfer.com/esurf

10 min read
■   Audi Jetfoil in the waves - Jet vs. folding propeller vs. TrueGlide