Back To Overview
E-Jetski
Sea-Doo Rise - eFoil or electric Jetski? 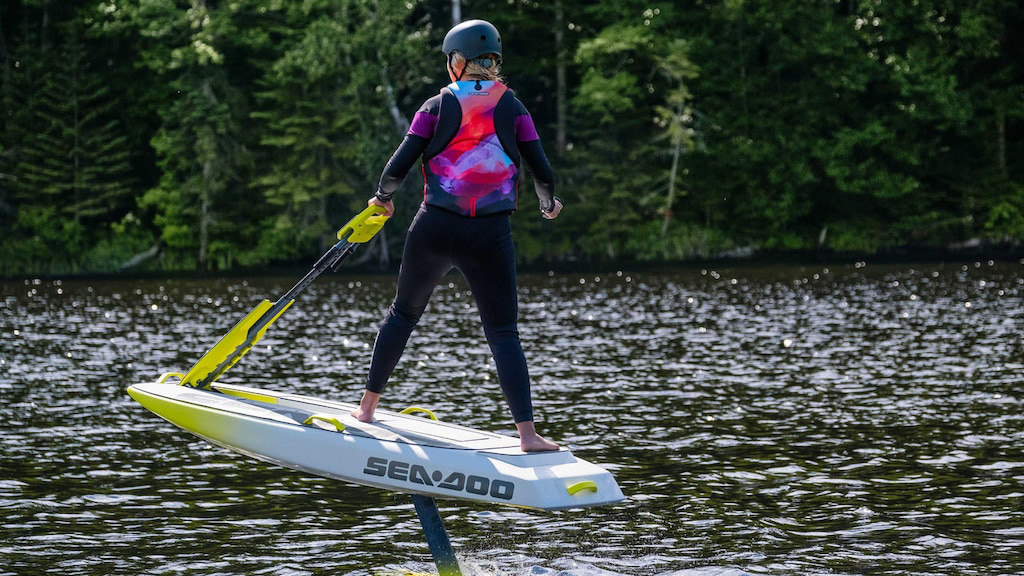 The Sea-Doo Rise - Is it an eFoil or an electric Jetski? Potentially something in between. Unfortunately we will only know in 2024.

The world is waiting for an electric Jetski from Sea-Doo, but so far no launch date for an E-PWC was released. Instead BRP announced the Sea-Doo Rise and calls it an electric hydrofoil board. The board seems to be huge and is addressed to „anyone“ according to their website. Big boards make it easy for beginners, but might get boring quite quickly once you build up your eFoil skills.

A retractible handlebar makes it even easier than other large size electric hydrofoil beginner boards. This handlebar makes it again a little bit look like an electric stand up Jetski as we have seen with Flyway. Although the Flyway is a much more radical board. The Sea-Doo Rise can also be ridden without the foil, which can be folded in, so that you can only ride on the surface. Again, like an electric stand up Jetski.

All in one device?

The foil can be deployed partly or fully to enable lower and higher flights. Sounds a little bit like one fits it all. Jetski, Jetboard and eFoil in one device. In past these all in one approaches have failed as these devices usually do all use cases good to a certain degree, but couldn’t compete with devices which are just developed for one use case in this category.

While experienced eFoil riders may laugh about this approach it might open a lot of new opportunities for the rental market. Traditional eFoils need practice, so it would be too dangerous to just give them out for rental.

You would need at least a one hour eFoil lesson to qualify for a safe ride. The Sea-Doo Rise may change this. The concept with the large board with a handlebar and deployable mast makes it very easy for beginners which can build up their skills in small and easy steps.

Sea-Doo is a big brand and it may attract a complete new target audience with its Sea-Doo Rise eFoil. We have seen this already with the Audi e-tron foil. So every announcement from big players will help the eFoil sport. Exciting times.

By now BRP, the company behind brands such like Sea-Doo, Ski-Doo, Can-Am, Rotax and others did not release any technical specs about the Sea-Doo Rise. From the pictures it seems that it is using a wireless remote as other eFoils. It is unclear how you would use this once your have both hands on the handlebar as you can see in one of the pictures.

From the pictures and video it must have at least 150 liters of volume and is probably 35-40 kg in weight - if not more. That would be a lot. No mention of top speed and range, but I would assume top speed might be below 40 km/h for this target group, but the range might be 2 hours or more as they would have space for larger batteries. These are all assumptions at this time, so don't quote me on this 😉

It would be also interesting to know if you can deploy the foil while your are riding or if you need to decide before the ride if you want to stay on the surface or get up flying. This could be an interesting feature if you head back to the beach in shallow waters.

If you look at the video you will see that the Sea-Doo eFoil is using a huge front wing, but has no stabilizer. I would be very interested to test how this rides. The propulsion seems to have no open propeller. Not sure yet if this is a Jetfoil or a fully shielded propeller, but it seems that the industry is moving away from open propellers. Players like Audi, Jetfoiler, Awake Vinga and others already avoid open props.

I find the launch video is well made. I viewed it multiple times, but it is disappointing that they start the campaign im 2022 when the launch date is 2024. This seems quite early. It will be also interesting to see what price BRP will charge for the Sea-Doo eFoil.

Mike from Jetsurfingnation also did a video about the Sea-Doo Rise eFoil. Have a look about his thoughts:

Well, let's hope BRP will release some more details about the Sea-Doo Rise eFoil in the near future. We will keep you updated.