There is a long history of the motorised surfboards which got documented way back to the 1930s. Many talented people tried to find an alternative if there are no waves or wind. Here is a brief overview.

1935 the Surf Scooter appeared in an Australian newspaper showing lifeguards testing the surfboard at Bondi Beach in Australia. It was according to some sources developed already 5 years earlier which would let the history of motorised surfboards start in 1930.

In 1938 Emil Hansen from Pennsylvania was showing his Scimboat. It was more a boat than a surfboard although the size was similar. It had of top speed of 30 mph or 48 km/h powered by a 7.5 horsepower propeller engine. The propeller was mounted at the top of the board for safety reasons, but it also had a magnetic kill switch. The weight of the aluminium board was 120 Pounds or 54 kg.

In 1948 Joe Gilpin was showing his Motorboard. This guy had certainly style as he was riding his motorised surfboard in a suit with walking stick and a cigar. The Motorboard prototype never went into production.

In 1960 well known surfer, surfboard manufacturer and inventor of the Hobie Cat catamaran Hobart was showing his motorised surfboard. He also invented an motorised skateboard. What a talented guy. In 1965 the Bloomingdales department stores launched the first commercially available motorised surfboard. It was expensive with about 1,700 USD and only 200 units were produced. It was called a jet surfboard.

In the same year George Carter came up with his Surfjet. His company was actually around since 1998 at was called Wild Thing Watercraft before it went bankrupt. And also George Barris introduced his motorised surfboard which actually had a seat. In 1973 the company North Hants Engineering was launching their Skidaddle surfboard powered by a 157 cc engine.

In the 1980s honeycomb surfboard producer Neil Townsend came introduced his Aquajet. A propeller powered surfboard. In addition in the 1980s different inventors came up with petrol powered surfboards. In Berlin there was even “Motorised Surfboard Club” which was riding their boards at Wannsee close to Berlin. We found 2 of these boards in the garage of Waterrebels.

In the 1990s Bob Montgomery launched his Powerski Jetboard which had quite a lot power. It was quite an impressive board, but did also not survive. 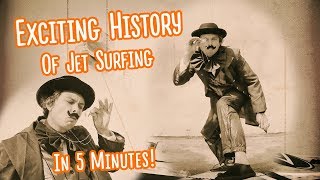 The first company who able to successfully launch a motorised surfboard was Jetsurf from Czech Republic. They started 1994 to develop high powered, light weight combustion engines for racing and are still the leader in petrol powered surfboards and host the Jetsurf Worldcup. Check out our interview with Martin Sula.

The first electric surfboards where Onean, Lampuga and Waterwolf. Onean has probably sold most electric surfboards so far at April 2019. We also interviewed Inigo Sobradillo the CEO of Onean. The original Lampuga electric surfboard went bankrupt in 2017, but the assets were bought by an investor and the new Lampuga relaunched completely new models in 2018. The Waterwolf is the only electric surfboard today which is using a propeller while all others are using jet engines. It can only handle riders below 85 kg, but is very close to the feeling of surfing.

Now we have April 2019 and this will become an exiting year. Lampuga just started mass production and many more electric surfboards should start shipping this year.

And don’t for the electric hydrofoils. The first electric hydrofoil shipping in volumes was Lift Foils eFoil. They shipped already 500 units in 2018. For 2019 a lot of other brands are expected to finally ship. Fliteboard from Australia, VeCarve from Kanada, Cabratec from Czech Republic, E-Takuma from Takuma Concepts, Jetfoiler from Kai Concept, Waviator from Germany, ElDoRiDo from Czech Republic and who know s which brands more.

You also see cheaper electric hydroids popping up from China such like Waydoo and Hoverstar. Time will tell which boards are reliable.

Important is that she prices will come down over the next years. The early electric surfboards and hydrofoils are still expensive, but hopefully larger volumes and new battery technologies will help here over the next years. If you want to travel with your board you have to ship your battery upfront to your hotel as you are not allowed to transport the battery on a place. This is an advantage of the petrol powered jetboards. You just take the petrol out and you can take them with you.

Special thanks for the contribution to this history of motorised surfboards article to jetboardlimited.com and jetsurfingnation.com